Up on the rooftops.

In China, Wuxia films are a staple, much as superhero films are here and westerns were in the 50s. They made some brief cultural impact with the success of Crouching Tiger, Hidden Dragon back in 2000 (and the legendary fight choreographer Woo-Ping Yuen who perfected wire work and is responsible for the graceful fight sequences in that film reportedly worked on this one) although it was to be, sadly, merely a brief moment in the American sun.

This film features Shang Ring in the title role as an itinerant Sherlock Holmes-like detective who travels throughout China solving whatever mystery comes her way. In the desert badlands of an, a string of brutal murders have been committed and the prefect of the city is sure that bandits from a neighboring town which is run by bandit gangs are to blame. Certainly, the evidence points in that direction as there is a literal convention of gangs occurring in an inn on the edge of town where the detective is staying along with her comic relief assistant (program note: none of the roles have been matched with the actors playing them in any literature I’ve been able to find other than the lead role). The Lady, whose given name is Sima Fei-yan, happens to be the niece of the city prefect who urges her to solve the crime for him. It also gives her a chance to catch up with the prefect’s son whom she grew up with and was at one time sweet on.

The closer she gets to the truth, however, the more she realizes that she is getting involved in something much larger than a mere serial killing. She is on the verge of unlocking an ancient secret that could mean life or death for those she cares about most.

Like many Wuxia films, the plot can be hard to follow sometimes and the subtitles roll across at light speed, sometimes too fast for even readers who are fairly speedy to make out. Characters show up in the film whose sole purpose is to kick the McGillicuddy out of somebody (or have it kicked out of them). The acting is over-the-top, the dialogue clunky and the special effects are often rudimentary at best. Some cinephiles turn their noses up at Wuxia for those reasons but true lovers of the genre realize that’s part of their goofy charm.

Most of the genre’s Western fans tend to come for the fight sequences and to be honest they won’t be disappointed, although they won’t be blown away either. This was a low-budget affair and at times it shows, whether on the lack of star power or the occasionally incomprehensible special effects decisions – just FYI guys, when horses gallop in the desert they leave a contrail of dust in their wake.

As entertainment goes, this is fun to watch if you understand the genre. Those who despise Wuxia films will likely not be converted to the cause watching this. Those that love them and forgive them their occasionally many sins are likely to find this a worthwhile investment of their time. Those unfamiliar with the genre and who are looking for an introduction to it, this probably isn’t a worthy starting point but at the same time it does maintain a lot of the elements common to most Wuxia films. One gets the sense that the producers were hoping to initiate a new franchise with this. It wouldn’t surprise me at all if they were successful in that goal.

REASONS TO SEE: The action is non-stop, just the way it should be.
REASONS TO AVOID: The story can be hard to follow and the special effects are weak.
FAMILY VALUES: There is plenty of martial arts violence.
TRIVIAL PURSUIT: This movie was initially made for Chinese television.
BEYOND THE THEATER: Amazon, FlixFling, Hoopla, Vudu
CRITICAL MASS: As of 6/24/19: Rotten Tomatoes: No score yet: Metacritic: No score yet.
COMPARISON SHOPPING: Crouching Tiger, Hidden Dragon 2: Sword of Destiny
FINAL RATING: 6/10
NEXT: Sides of a Horn 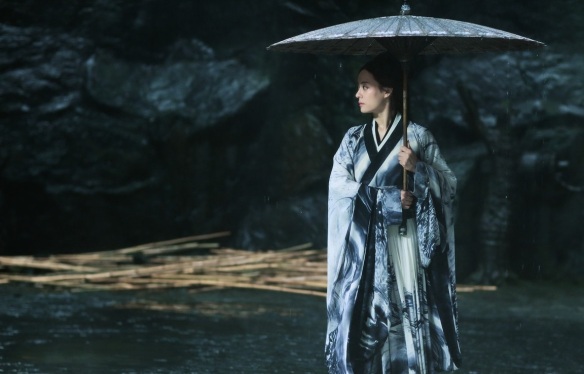 Perhaps the most acclaimed film director to come out of China is Yimou Zhang, whose wuxia classics Hero and The House of Flying Daggers have thrilled art house moviegoers for more than a decade. However more recently, missteps like his anglicized The Great Wall failed to connect with mass audiences. However, his latest is a return to form. Garnering massive critical acclaim from its debut at last year’s Venice Film Festival, the movie is once again familiar territory for the great action director, set during the Three Kingdoms period in China.

Commander Yu (Deng) is the beloved general of the Pei Kingdom’s armies who was gravely wounded in battle with the nearly invulnerable General Yang (Hu). However, he appears to be well on the mend and his somewhat prevaricating King (Zheng) is surprised to discover that his impetuous Commander has picked a fight with the man who recently wounded him with the city of Jing, which had been lost to the invaders of Yang Kingdom, going to the winner.

However, the King doesn’t want these events to lead to war so he instead offers his sister (Guan) as concubine to Yang’s son (Wu). What the King doesn’t know is that the Commander isn’t who he appears to be; he is a commoner named Jing (also Deng) who is serving as the real Yu’s shadow, or impostor. Yu has schemed to use the fake Yu as a diversion while a handpicked army of renegades retakes the city. Knowing that this will not only embarrass the king but also lose him what political capital he might have with the nobles, Yu expects to take the throne for himself. Complicit in the dealings is Madame (Sun), Yu’s devious wife. The machinations are almost Machiavellian – some would say Shakespearean.

Zhang as a director is known for his extravagant use of color but he goes in entirely the opposite direction here. Greys and whites and blacks make up the majority of his palate, giving the film an almost black and white look to the point that at times I wondered if he hadn’t shot the film in black and white. Extraordinarily, he did not – everything here is about production design and costuming. In itself it’s an incredible achievement. However, it does get distracting at times. There is also an awful lot of dialogue which isn’t of itself a bad thing but it forces us to be reading the subtitles rather than taking in the marvelous visuals. I’m not often an advocate for dubbing but here is an example where it might have gone better had they gone in that direction.

There is a good deal of gore here but the martial arts sequences are elegantly staged, often using the ubiquitous rainfall as an ally – Yimou even posits umbrellas being used as a weapon, giving the battles an almost feminine grace and a touch of whimsy – a group of battle-hardened warriors slide down a city street in overturned umbrellas in a kind of martial arts waterslide effect. In all, this is a return to form for Yimou and a must-see for any fan of Asian cinema, particularly of the wuxia variety. While it is for the moment on the Festival circuit, it is expected to be in limited theatrical release in May and through the summer. Start bugging your local art house programmer to book this one now.

REASONS TO SEE: The film is epic in scope. The ending is full of twists and turns and has a fair amount of gore for those who love that. The zither duel is absolutely spellbinding.
REASONS TO AVOID: The movie lacks color particularly in the palace scenes, a bit of a switch for Yimou.
FAMILY VALUES: There is a whole lot of martial arts and war violence and some brief sexuality.
TRIVIAL PURSUIT: The black and white tones that most of the film is shot in is meant not only to emphasize the relationship between light and shadow but to also follow in the style of Chinese ink wash paintings.
CRITICAL MASS: As of 3/13/19: Rotten Tomatoes: 91% positive reviews: Metacritic: 88/100.
COMPARISON SHOPPING: The House of Flying Daggers
FINAL RATING: 8.5/10
NEXT: Bring Me an Avocado