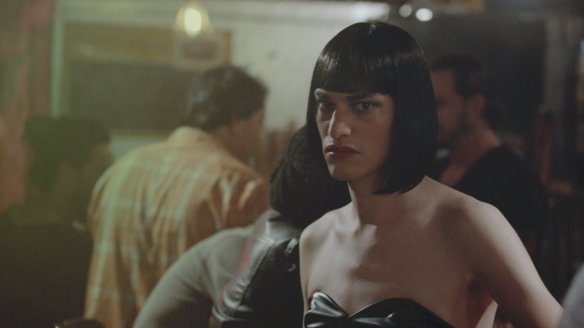 You meet the happiest people in bars.

Love doesn’t choose very well. It just chooses. Who we fall in love with may not necessarily be the best person for us but the heart doesn’t care. It loves who it chooses.

Morgan (Mather) is a young woman from a middle class, conservative background who has gotten some bad news. Her metastatic brain tumor has gone past the point of no return and she has just three months to live. This doesn’t sit well with her parents, her stolid dad Dennis (Heyerdahl), her mom Janet (Turk) and her brother Bailey (Stewart).

Jordan (Villa) is a troubled young man from the wrong side of the tracks. His somewhat fluid sexual identity makes him a target for abuse, something he’s not really a stranger to. When he meets Morgan in a club, she is making videos with an old Super-8 camera to try and document what’s left in her life. The two find each other talking, and eventually these polar opposites find common ground.

As Jordan and Morgan fall in love he is made aware of her situation. She invites him over to meet her amazingly tolerant parents and her kid brother who seems to accept Jordan out of hand even though he teases the sensitive artist mercilessly. For Jordan’s part, he is inspired by Morgan to write a children’s story about a Dragonfly boy and a bee princess who fall in love. Soon, life imitates art.

But it isn’t easy for two such different people to co-exist and with the specter of Morgan’s imminent demise and her desire to die somewhere other than a hospital looming over their heads, Jordan is going to have to do a lot more than just break the rules for her. He’s going to have to write some new ones.

The dying teen story tends to be one of the most poignant in all of the world’s tales (although I’m guessing Morgan/Mather is more in her mid to late 20s) and to the filmmakers credit, they don’t exploit it as much as they might. The film concentrates heavily on mortality itself, and the question of quality of life versus quantity of years. With Morgan’s clock ticking down, it seems a ripe opportunity to get her thoughts on the subject.

And we kinda do, but they are expressed so poorly in platitudes that sound profound but comes off as pretentious and smug. The movie tries really hard to be different than the norm, too hard in fact and we end up feeling talked down to rather than engaged in conversation. It’s a shame, because the cast actually manages to put together some fine performances, particularly by Mather, Heyerdahl and Villa, but they are let down because they are given such preposterous dialogue. On the beach, Jordan purrs “You are my realistic fantasy” while Morgan coos “You are my fantastic reality” and the rest of us throw up a little inside our mouths. Real people don’t talk like that. At least, real people you’d want to actually talk to.

I like the idea of making Jordan transgender, but they don’t really do anything with it. It comes off as almost an affectation, like Jordan just happens to like wearing skirts to be different rather than an integral part of who he is. That does actual transgenders a disservice. I thought that giving both Jordan and Morgan (and for that matter, Bailey) unisex names was a bit too cutesy. There’s a feeling that Bird, who also wrote the film, was writing about stereotypes rather than people. While the chemistry between Mather and Villa seemed genuine, the relationship did not.

I was annoyed in a lot of ways by Honeyglue because there really is a good movie to be made here and this is a squandered opportunity to say the least. The performances and subject matter make the movie marginally worth seeing, but the writing and overall tone just lost me. I don’t know if Bird knows any cancer patients or transgenders and maybe he does but if he does, they didn’t make it into the script. The characters didn’t feel real; in fact, none of the characters here did, and that’s a big problem. The movie is gradually expanding to locations around the country and will likely be on VOD at some point, but this is one only for the curious. Serious film lovers will likely find this as frustrating as I did.

REASONS TO GO: Tackles an important subject head-on. Some decent performances in the cast.
REASONS TO STAY: The dialogue is occasionally pretentious and overwrought. Tries too hard to be daring and different.
FAMILY VALUES: There’s a fair amount of foul language, sexuality and some drug use.
TRIVIAL PURSUIT: The animation, based on the children’s book that Jordan is writing, was done by Kevin Weber.
CRITICAL MASS: As of 6/3/16: Rotten Tomatoes: 40% positive reviews. Metacritic: 17/100.
COMPARISON SHOPPING: The Fault in Our Stars
FINAL RATING: 5/10
NEXT: My Big Fat Greek Wedding 2