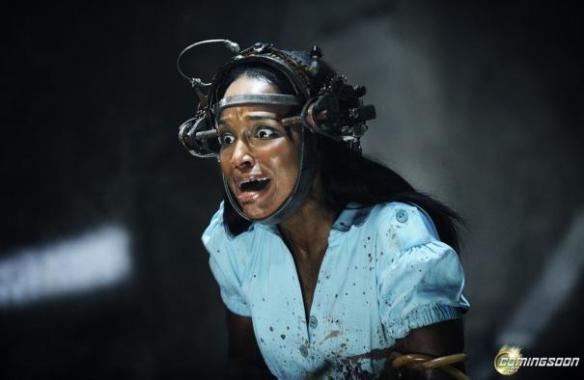 It is nearly impossible to give you a plot summary of Saw VI without giving you spoilers on the previous films, so therefore my description of the action is going to be necessarily vague in the odd chance that you might be thinking of seeing any of the previous films in the series first.

Saw VI picks up directly after the events of Saw V. The police continue to search for Jigsaw’s (Bell) remaining apprentice who is disturbingly close to home. A health insurance executive (Outerbridge) who has denied treatment to individuals who died for its lack (including Jigsaw himself) is forced to play out four twisted traps. We see in flashbacks more detail on the relationship between Jigsaw and Amanda (Smith) and how Jigsaw’s wife Jill (Russell) is dealing with the contents of the mysterious box left to her in Jigsaw’s will. As the traps begin to unfold, the noose begins to tighten around the apprentice, including from an unexpected direction. Is the game over finally?

Well, no not yet. There is one film yet to go in the series and after the disappointment that was the fifth film in the series, the franchise seems to have regained a bit of momentum heading for its conclusion. Greutert, an editor in the series, makes his feature film directing debut and does a nice job, keeping the tension and action running at high levels.

The secondary story line with the insurance executive keeps the interest up. One of the big complaints about the series and the last couple of movies in particular is that the portion of the movie that deals with Jigsaw and his apprentices seems to have shrunk, leaving the backstory (and side story if you will) to take up less than half of the movie – and the portion with the traps to be the far more interesting portion of the movie than that which explains how the principles got there. That’s not really a good sign, but the traps are so fiendishly clever here that it does make up for that lack somewhat.

I’ve said it before, but relegating Jigsaw to flashbacks was a tactical error. Mandylor is a decent actor but his character has none of the charisma of Jigsaw; consequently his sequences seem to be the ones most likely that you’ll want to fast forward through, although there’s a terrific scene at a crime lab that involves him that is actually worth waiting for.

Perhaps the most important accomplishment the movie is going to have is to make viewers want to watch the final installment; certainly this is a flawed movie and by no means the best in the series but at least it doesn’t make you turn off the DVD player in disgust with a cry of “Never again!” Two trilogies down the road and the series has at least kept our interest and displayed a certain amount of cleverness and invention throughout. That’s something worth respecting.

WHY RENT THIS: Clever traps and a decent secondary story line.

WHY RENT SOMETHING ELSE: Mandylor’s Hoffman is still not nearly as interesting as Bell’s Jigsaw..

FAMILY VALUES: Violence and torture and gore, oh my!

TRIVIAL PURSUIT: Tanedra Howard was the winner of the SyFy reality show “Scream Queens” and won a role in Saw VI.

NOTABLE DVD EXTRAS: There is an unrated DVD edition which contains both the theatrical release and an unrated version of the film. This edition also includes four music videos and a featurette on the building of a Saw-themed haunted house attraction at the Universal Studios theme park. The Blu-Ray edition has these features and the first Saw film as an extra added attraction.

BOX OFFICE PERFORMANCE: $68.2M on an $11M production budget; the movie was a modest blockbuster.