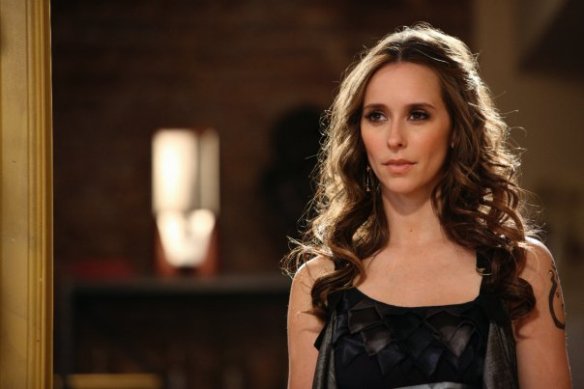 A coffee house, a neighborhood place to sit, hang out, surf the web and just talk over a cup of coffee with a friend. Every neighborhood worth its salt has one, whether it be a Starbucks or a local joint, unique to its environment. Some however are much more unique than others.

This particular café has a pair of baristas – Claire (Hewitt) and Todd (Gold). Todd has a thing for Claire, but she’s in a relationship with a brutal, abusive jerk (Bellour) and he’s what you might call a little bit on the mousy side. Just a little bit.

It also has a cast of regulars – a writer (Short) who has a secret connection to Todd. A drug dealer (Kennedy) who is beginning to get the idea that he needs a career change. A married man (Cecil) who attends the movies with a woman (McManus) whom he is desperately attracted to. A cop (Prince) who is looking for his cousin who is a junkie and also a regular at the café.

All of which is witnessed by a man (Palmer) on a laptop who gets a video message from a young girl named Kelly (Lowes) who claims that the café is a computer generated environment she created. The man is at first skeptical but when the programmer makes some things happen, he realizes it’s the truth. He realizes he is face to face with his world’s God.

This is a bit of an allegory, but it’s far from being preachy although there are certainly some Christian overtones. At least you aren’t hit over the head with it, as some faith-based films are prone to doing. No, this can be taken just as easily as a treatise on the nature of reality. Whether the creator is a computer programmer, an all-powerful entity or a series of random events, our existence is shaped by the knowledge – or ignorance – of that which created us.

I have to admit I didn’t expect much from this film, not hearing much of a buzz about it but I was pleasantly surprised. The movie has a great deal of heart and I found myself feeling very comfortable in the café, like one I was familiar with and hung out at all the time which I suspect was the goal of the filmmakers in the first place.

In fact the entire cast does a pretty solid job. Some of the storylines work better than others (while I like the two characters from the movie infidelity storyline, was it really necessary to the plot?) as is usually the case in movies like this. However, the focus is Gold and Hewitt to a large degree (which is a bit strange given the whole Avatar-Programmer storyline which is the crux of the plot) and they carry it off nicely.

This is probably going to be a little hard to find but worth the effort. It’s a charming film that asks some pretty big questions, doesn’t lead you towards any set of answers and doesn’t seem to conform to any specific philosophy. I like pictures that have both brains and heart – we humans are possessed of both and films that cater to both of them are both rare and appreciated.

WHY RENT THIS: A nice ensemble piece. Had more heart than I anticipated.

WHY RENT SOMETHING ELSE: Not all the storylines work as well as they might.

FAMILY VALUES: Some violence, some bad language, some drug use and some sexuality.

TRIVIAL PURSUIT: The film was shot in a working café in West Philadelphia.