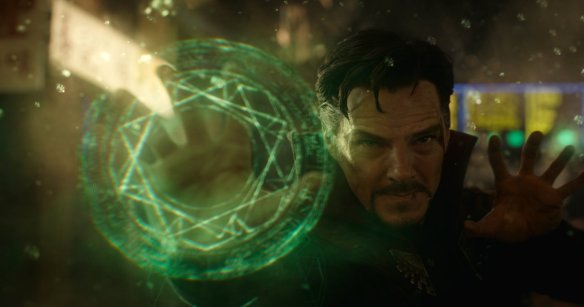 He’s a magic man, he’s got the magic hands.

It was Arthur C. Clarke, author of 2001: A Space Odyssey who once said “Any sufficiently advanced technology is indistinguishable from magic.” Of course, that’s assuming that there is no magic but then again if there was such a thing it would likely end up being explainable by scientific theory once we understood it. Then again, there’s always the possibility that magic is real.

Dr. Stephen Strange (Cumberbatch) is one of the top neurosurgeons in the world. He has saved literally thousands of lives and lives in a Greenwich Village apartment that is more palace than apartment although it is somewhat sterile in many ways. Dr. Strange is a bit of an egotist, something that has made his relationship with Dr. Christine Palmer (McAdams) fall apart, although they are still fond of each other – it’s just that Strange is just a little bit fonder of himself.

A terrible car accident puts paid to all of that however. His hands – those marvelous, life-giving hands – hae been badly injured. He can barely hold a scalpel anymore and has zero control over his nerves. His hands shake like an epileptic at a disco revival. He has tried every surgical option and drug known to man but nevertheless his situation remains unchanged.

Desperate, he discovers the case of a man named Jonathan Pangborn (Bratt) who was told he’d never walk again by plenty of doctors, including Strange himself. Amazingly he was not only walking but playing basketball. When asked what his secret was, Pangborn sends Strange to Kathmandu to find a particular order of monks. While searching the streets of Kathmandu for it, he runs into Mordo (Ejiofor), a disciple of the person Strange is looking for. Mordo takes Strange to The Ancient One (Swinton), an ancient Celt who reigns as Sorcerer Supreme, a title of respect and the latest addition to the McDonald’s Value Meal menu.

And she’s in need of all the help she can get. One of her former disciples, Kaecilius (Mikkelsen), has essentially gone mad. He wants to create a world without death and in order to do that, he has to summon Dormammu – an ancient creature from another dimension that predates the Gods and who wants to wipe out all life in our universe. So a world without death is a world without life, right? Those tricky old god bastards!

Kaecilius is a powerful sorcerer and Strange is just learning his way around. As Kaecilius races to destroy all the wards that protect our dimension from beings like Dormammu, Strange discovers that he has been chosen by a pair of powerful artifacts – and that the way to beat a god is to think like one.

After a couple of subpar Marvel offerings, it’s nice to see that they’re back on track with a movie that sums up everything right about the Marvel films. Firstly, this is a movie about characters and not superpowers. Steven Strange is an interesting human being full of human frailty despite having the power to warp reality itself. Cumberbatch does a marvelous job of capturing the good doctor that I remember from the comic books, although I have to admit that he sounds a little bit strange with an American accent. Ouch.

The special effects here are pretty impressive, although they do borrow heavily from other sources. Certainly the reality warping takes a page right out of Christopher Nolan’s Inception and some may find that to be a bit of a cop-out, but at least it’s utilized in a more physical way than Nolan did. The spells look almost scientific in nature just as you’d expect a man of science to relate to casting magic spells. All in all, some of the best effects we’ve seen yet in a Marvel film and that’s saying something.

The relationship between Strange and Palmer doesn’t generate a lot of heat; there’s more of a bromance between Mordo and Strange. Ejiofor is a reliable performer who always seems to get the most out of every role he tackles. Swinton is simply put one of the strongest actresses working today; the role of the Ancient One, who in the comics was an elderly Asian gentleman, was rewritten extensively to suit Swinton who is none of those things (elderly, Asian or a gentleman).

The action is pretty much non-stop once it gets going, although it takes a little while to. In essence, once again Marvel has done it – created an entirely different superhero movie that retains the feel of the comic book, the consistency of a shared cinematic universe but able to retain individual identities for each film. Any franchise filmmaker will tell you how extraordinarily difficult that is. In any case, it’s a fitting lead off to the holiday blockbuster season. I can’t think of a single reason why anyone who likes entertaining movies shouldn’t see it.

REASONS TO GO: The special effects are mind-blowing. The story and characters are as good as any in any Marvel movie. One of the best supporting casts of any Marvel movie.
REASONS TO STAY: The film seems to exist on its own plane outside the rest of the Marvel movies.
FAMILY VALUES:  You’ll find plenty of violence and carnage, some mind-bending changes of perspective and a car crash sequence that’s rather intense.
TRIVIAL PURSUIT:  The appearance of the comic book character was based on actor Vincent Price and even had the middle name of “Vincent.” In recent years the character’s look has been modernized, with a goatee replacing the pencil mustache he’d had since his inception.
CRITICAL MASS: As of 11/21/16: Rotten Tomatoes: 90% positive reviews. Metacritic: 72/100.
COMPARISON SHOPPING: The Shadow
FINAL RATING: 8/10
NEXT: Amanda Knox