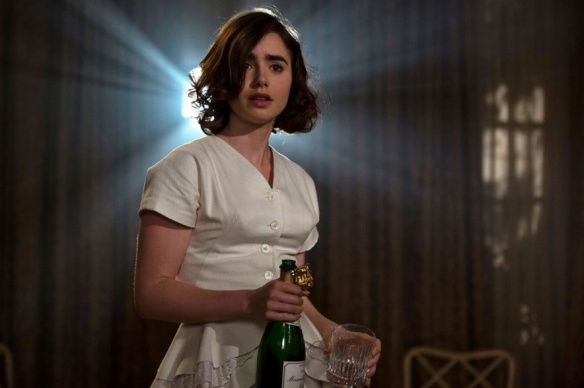 Most of us have to live within the rules. The rules after all are there for a reason. There are a fortunate few – or perhaps an unfortunate few – who for one reason or another are exceptions. The rules don’t really apply to them. It can be very liberating – and very lonely.

Marla Mabry (Collins) has come to Hollywood in sunny 1958 to make her fame and fortune as an actress. No less than Howard Hughes (Beatty) has put her under contract. She and her devout Baptist mother (Bening) are met at the airport by Frank Forbes (Ehrenreich), a driver with ambitions of his own.

She discovers that she is one of 26 girls under contract to Hughes, all of whom he is insanely jealous towards. In fact, “insane” is a word that fits his behavior which has grown increasingly erratic as paranoia and obsessive-compulsive disorder have begun to take hold of his life like a dog with a bone. Forbes’ boss Levar (Broderick) shows Frank the ropes, but even though it’s forbidden he begins to have romantic feelings for Marla, feelings which are returned. In the meantime, Hughes begins to fall for the pretty, talented singer-songwriter-actress, but he is under siege as there are those who wish to declare him incompetent and take his company away from him. Those closest to him – including Frank – are determined not to let that happen.

First, this isn’t really a biography of the billionaire. Certainly some of the events depicted here actually happened, but Marla Mabry and Frank Forbes are entirely fictional; so is most of the rest of the cast in fact, although a few historical figures make appearances now and again. This is more of a fable of the Howard Hughes myth than anything else.

Beatty, who hasn’t appeared onscreen in 15 years or directed a film in 18, does a terrific job with Hughes keeping him from becoming a caricature of mental illness. Hughes feels like a living, breathing person here rather than an interpretation of an encyclopedia entry. Often when Hollywood brings real people to the screen, they feel more mythic than actual. I always appreciate films that utilize historical figures that feel like human beings rather than animatronic renditions of legends.

The cast is made up in equal parts of veteran actors, some of whom rarely appear onscreen these days (like Bergen and Coleman) and up-and-comers with huge potential (like Ehrenreich and Collins), with Beatty leaning towards the former in his casting decisions. It is certainly welcome watching some of these pros who are either semi-retired or fully retired plying their craft once more. Of particular note is Bergen as the matronly (and occasionally curmudgeonly) but ultimately kindly secretary/personal assistant to Hughes.

The issue here is that the movie is long and the plot bounces around from scene to scene with an almost manic quality, sometimes giving short shrift to subtlety and other times leading up blind alleys and locked doors. I get the sense that Beatty is trying to craft a parable about the nature of wealth and power and its corrupting influence. Hughes seems like a nice enough guy but his money and influence tends to corrupt everyone around him, including those who didn’t start off cynical. One of the characters gets out before any real harm is done to them; another gets sucked into the vortex.

While this is something of a passion project for Beatty (he’s been trying to get a film made about Hughes since the early 70s) it doesn’t feel like one. It’s a bit bloated and self-defeating, but there’s enough that is interesting going on to make it worth a look. It’s mostly out of the theaters by now – critical indifference and an audience that is attracted to movies about superheroes and aliens more than about those who shaped the world we live in (as Hughes surely did) have hurt the film’s box office receipts. What the movie lacks in spectacle though it makes up for in genuine affection for its subject and that’s something you can’t get with all the CGI in the world.

REASONS TO GO: It’s lovely to see some of these veteran actors in action here..
REASONS TO STAY: The plot is a bit scattershot.
FAMILY VALUES: Some adult thematic elements, some brief sexual material, occasional profanity and drug references.
TRIVIAL PURSUIT: Bo Goldman, who gets story credit on the film, also wrote Melvin and Howard about Hughes’ supposed encounter with Melvin Dummar.
CRITICAL MASS: As of 12/17/16: Rotten Tomatoes: 56% positive reviews. Metacritic: 59/100.
COMPARISON SHOPPING: Café Society
FINAL RATING: 6.5/10
NEXT: The Monster