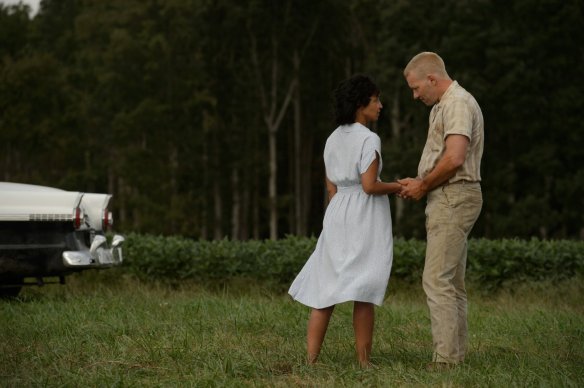 At one time in our history, interracial marriages were illegal in a number of states of the union. Those who supported such laws often cited the Bible about how God never meant the races to intermix. This is living proof that the more that things change, the more they stay the same.

Richard Loving (Edgerton) is a hardworking construction worker in rural Virginia, a town called Central Point. He lays bricks to build homes. He also has fallen in love with Mildred Jeter (Negga), a woman of African descent. The feeling is mutual and he gets her pregnant. Richard is over the moon about this in his own stolid way; he proposes marriage and she accepts. However, in order to marry her, he’ll have to drive to Washington DC where interracial marriages are legal. The couple returns home to live with Mildred’s parents.

Five weeks after the ceremony, Sheriff Brooks (Csokas) and his deputies kick down their door and arrest the couple who had been sleeping soundly in their bed. Richard is bailed out but Mildred is kept several days as the obsequious county clerk refuses to allow anyone to bail her out until after the weekend. The couple engages a lawyer (Camp) who is acquainted with Judge Bazile (Jensen) who is hearing the case. He agrees to drop the charges – if the couple leaves the state of Virginia immediately and vow not to return for 25 years.

The Lovings are willing to comply but life in Washington DC (where they’re staying with a member of Mildred’s family) is a far cry from the peaceful rural life they loved. Homesick and without anywhere to turn, Mildred writes a letter to Bobby Kennedy, then the Attorney General who refers the matter to the American Civil Liberties Union. The case is assigned to lawyer Bernie Cohen (Kroll) who knows that this could be a landmark case – but it will require much sacrifice on the part of the Loving family.

The case is an important one, one that was used as a precedent in striking down recently the Defense of Marriage Act that prevented same-sex marriages. There is certainly a modern parallel to be made here but director Jeff Nichols wisely chooses to play that aspect down. He seems to prefer making his point quietly and subtly.

There is no speechifying here, no grand courtroom arguments and no stirring orchestras highlighting moments of great sacrifice. Mostly, Nichols portrays Richard and Mildred as ordinary folks who just want to be left alone. They are thrust into the national spotlight somewhat unwillingly; they never set out to be civil rights symbols but they certainly had to be aware that they would become one. We aren’t privy to that side of them however; what we see is the couple going about their lives while coping with what had to be immense pressure.

Negga’s name has come up this awards season for Best Actress honors and she’s almost certain to get a nomination for the Oscar (although she will have an uphill battle against Natalie Portman’s performance In Jackie which is currently the odds on favorite to win the award) . It is Mildred’s film and mostly seen from her point of view. A shy and retiring sort, she is by necessity the spokesperson for the couple; Richard is so taciturn that he is almost surly. Negga plays Mildred with grace and dignity, and at no time does she ever give a hint of feeling sorry for herself, although Mildred had plenty of reason to.

Edgerton has much less dialogue to deliver although he has maybe the most emotional scene in the movie when he breaks down when things are looking their bleakest. Richard was not a very complicated man and certainly not a loquacious one; he just wants to be left alone, but he realizes that he can’t have the life he wants in the home he’s always known if something isn’t done and so he simply allows those who have the savvy and the education to get things done to guide his steps, although he clearly isn’t always happy about it.

The overall vibe is very low-key; there are few scenes that are loud and I don’t mean just in volume. Mostly Nichols keeps things quiet and simple. He resists the urge to portray the couple as heroic in the traditional sense; they were heroic simply by saying “we only want to love each other and build a life together.” They weren’t activists, they weren’t firebrands and Nichols prefers to stick to history here. Some might even call them dull.

But they were heroic nonetheless. Many thousands of people who have married outside of their race owe their freedom to do so to Richard and Mildred Loving. Both of them are deceased at this point so there’s no way to know what they thought of this portrayal of them; something tells me that had they lived to see this movie, they probably would have wondered what all the fuss is about. This is an outstanding movie that portrays the kind of people that I think should truly considered American heroes. Heroes don’t always run into burning buildings or run onto battlefields; sometimes a hero is the one who simply says “this isn’t right” and sees things through until real change occurs. The Lovings certainly did that.

REASONS TO SEE: A story with reverberations that make it timely even now. Understated but powerful performances from Negga and Edgerton elevate the film. The film doesn’t hit you over the head with a political message.
REASONS TO MISS: May be too low-key for some.
FAMILY VALUES:  The themes are pretty adult.
TRIVIAL PURSUIT:  Nichols, Edgerton and Shannon previously combined on Midnight Special.
CRITICAL MASS: As of 12/21/16: Rotten Tomatoes: 89% positive reviews. Metacritic: 79/100.
COMPARISON SHOPPING: The Loving Story
FINAL RATING: 8/10
NEXT: Allied