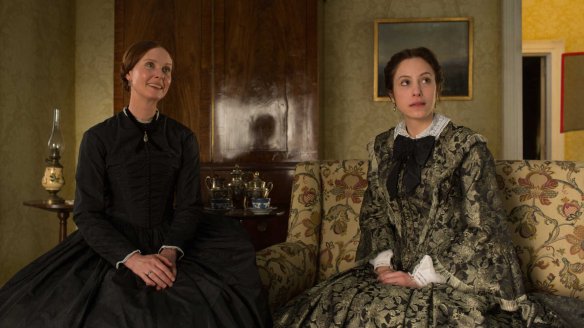 Sisters are doing it for themselves.

Emily Dickinson remains, more than a century after her death, one of the giants of American literature. Little-known in her own time (only a dozen of her poems were published in her lifetime, most of them heavily edited), she lived much of her life as a virtual recluse in her home, rarely coming out of her home and in fact rarely emerging from her bedroom. It was only after she passed away that her sister discovered a treasure trove of her poems and made it her life’s work to see them published and even then she didn’t get the acclaim she deserved until well into the 20th century.

So who was Emily Dickinson? As a young woman (Bell), she was dismissed from Mount Holyoke Academy (nowadays Mount Holyoke College) for her lack of piety. Rather than capitulate to the demands of the headmistress, she stood up for herself much to the bemusement of her father (Carradine). Emily returned home to live with him and her mother (Bacon) as well as her brother Austin (Duff) and most importantly her sister Lavinnia (Ehle), known to one and all as Vinnie.

Now grown into full womanhood, Emily (Nixon) asks and receives permission from her father to use the early morning hours when all else in the household are asleep to write. It is permission, she later explains, she would never get from a husband. Emily remains outspoken about the place of women in the society of the day and she finds a fellow traveler in Vryling Buffam (Bailey) with whom she exchanges barbs at the institutions of church, marriage and society in general. Twirling their parasols like nunchuks, the two make a formidable pair.

As the years pass, Emily maintains an increasingly faint hope of writing something important. She begins to get discouraged and as loss piles upon loss, she grows embittered and more withdrawn from the society in Amherst. Her brother’s infidelity causes a family schism that creates tension in the household, a tension that Vinnie tries in vain to mediate. Emily does get at least one persistent suitor (Menaul) but she is so cruel to him that at last he takes his leave of her. She develops a passion for the married Reverend Wadsworth (Loren) but when he is transferred to San Francisco she is devastated. Thinking herself too plain for marriage, she changes her wardrobe from nearly all black, as was common in the day to all white. As those closest to her die or get married (which Emily likens one to the other), she increasingly withdraws from life.

This is not the Emily Dickinson I had pictured in my head, which shows you how much I know about the great poet. I had always thought her shy and retiring but in fact it was not shyness that made her reclusive. She was forthright and blunt in conversation almost to the point of cruelty. She was an independent thinker as well which was not attractive to men of the era but Emily didn’t need a husband to feel complete in life.

Nixon gives a performance that may be the high water mark of her career, which is saying something. She’s one of those actresses who rarely gets much acclaim but has over the years quietly accumulated a resumé of distinction, one that would be the envy of any actress. Best-known for her work in Sex and the City, she really inhabits the role of Emily Dickinson, reading her poetry in voice-overs to help put context into the events onscreen. It is a forceful performance that only grows more powerful as the movie goes on.

She gets plenty of support, particularly from Ehle who is a marvelous actress in her own right and like Nixon doesn’t always get the acclaim she deserves. As Vinnie, Ehle is the embodiment of compassion and loyalty. Carradine also excels as the somewhat stiff-necked father, and Bailey almost steals the movie as the ebullient and outgoing Vryling who it is a shame is a fictional composite. I would very much like to believe that such a woman existed at that time – and perhaps she did – just not in Emily Dickinson’s world.

There is a definite Merchant-Ivory vibe her in the sense that we get a lush visual experience with mannered performances and dialogue that reflect the era. Especially early on in the film, the actors seem to struggle with the language and the overall effect is a little awkward but as the movie goes on it feels a little bit more organic, although the delivery is still somewhat deadpan.

This is definitely a movie for adults with adult attention spans. It might seem a little long (and definitely younger audiences will find it so) but in the end this is a movie to be experienced, to be allowed to envelop the viewer and bring them into the world of Emily Dickinson in mid-19th century Amherst. I can’t honestly recommend this movie to everybody – hence the somewhat middling rating – but for cinema buffs, lovers of history, lovers of poetry and those who have cinematic patience, this is a movie that will transcend its score and reel you in.

REASONS TO GO: Nixon gives a superb performance. Davies uses Dickinson’s own poetry to accentuate the various scenes.
REASONS TO STAY: Some of the actors sound uncomfortable with the language and style of 19th century New England. The movie is a bit on the long side and younger audiences may find it tough sledding.
FAMILY VALUES: There is one scene of sexual material, a disturbing image and some thematic material inappropriate for children.
TRIVIAL PURSUIT: Davies used six different biographies of Dickinson as source material in order to get her character right. He believes that she was a legitimate genius.
CRITICAL MASS: As of 5/11/17: Rotten Tomatoes: 93% positive reviews. Metacritic: 78/100.
COMPARISON SHOPPING: The Hours
FINAL RATING: 6.5/10
NEXT: The Wall