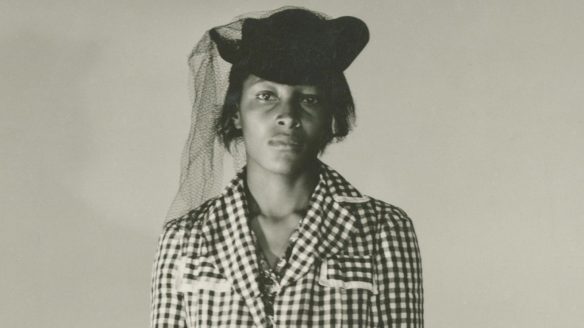 Portrait of a brave woman.

We like to think of America as a great shining beacon, a light of freedom and democracy for the entire world. However, it is no secret that America has its dark side as well, from its treatment of native peoples (some would say attempted genocide) to the advent of slavery. It is the latter that shapes our country perhaps most negatively, from ongoing displays of racism and thuggery to the demeaning of black culture and African-American achievements to the segregation of the black community and accompanying lack of educational and career opportunities that white children take for granted.

African-American women have in many ways borne the brunt of the post-bellum white American racism. In the days of King Cotton and plantations, white slave owners routinely used black women as sexual objects, sometimes allowing their teenage sons to pick out a particularly fetching slave to use to initiate them into sexual manhood, although this is scarcely the behavior of men. Then again, the white slave owning population didn’t see their black chattel as human; they were to be used as they saw fit and if that was brutal, well, it was a step up from the jungles, wasn’t it?

That attitude persisted well after the end of the Civil War (some would say it persists to this day). In 1944, a 24-year-old mother of a 9-month-old daughter and wife of a sharecropper named Recy Taylor was walking home from church when she was approached by six teenage white boys in a car who force her into the car at gunpoint. They drove her blindfolded into a remote part of the woods, raping her repeatedly over the course of three to four hours, causing so much internal damage that the young woman would never be able to bear children again. After the ordeal, the boys dropped her off at the side of the road with a stern warning to tell nobody.

In those days, it was not unusual for African-American women to be sexually assaulted by white men but it was extremely rare for those sorts of sexual assaults to go reported, particularly in places like Abbeville, Alabama where the assault took place. Nonetheless when Recy arrived home the first thing she did was report the incident, identifying as many of the attackers as she could.

Local sheriff Louis Corbitt (whose family owned Recy’s ancestors and after the 13th Amendment freed them, the ex-slaves took the Corbitt family name as their own) reluctantly took the statement but did nothing. The boys were questioned and released. Recy, who’d never had any trouble with the police – none in her family ever had – was falsely labeled a prostitute. With the help of the NAACP and their lead investigator Rosa Parks (yes, that Rosa Parks) Recy persisted in search of justice which in the Deep South was a rare thing for African-Americans to achieve. Despite two trips to the grand jury – made up of all white men – nobody was ever charged with the crime.

Documentary filmmaker Buirski was inspired by the book At the Dark End of the Street by Danielle McGuire (the author appears as an expert here) telling the tale of Taylor, who was a cause célèbre in the black press which widely reported the story around the country whereas it was largely ignored by the mainstream press which largely ignored crimes against African-Americans (and some would say it still does). The efforts of the black press largely forced the Alabama governor to conduct an investigation which would lead to a second grand jury and while the results remained the same, it had more to do with the color of the defendants and more so the color of the victim than with any semblance of law.

There are a lot of talking heads here, including the surviving members of Taylor’s family – mainly her younger brother and sister Richard Corbitt and Alma Daniels – and a variety of experts. While I’m not a fan of interview overuse, I have to admit that Crystal Feimster, an academic from Yale whose expertise on the history of the Civil Rights movement is put to good use here, is impressive. Articulate to the point of eloquence, she clearly and intelligently brings the plight of black women of that era to bold life. She rightly assigns them credit for being a driving force in the Civil Rights movement, connecting the dots from Recy Taylor to Rosa Parks to Martin Luther King. Whenever Feimster is on camera, my ears would always perk up because I knew she would have something insightful to say.

But this isn’t all just talking heads. Buirski deftly weaves in rare archival footage, family films and “race films” – movies made by black filmmakers for black audiences going back to the silent era until the mid-50s. They have gone largely ignored except for all but the most dedicated film buffs and academics so seeing some clips from these films was doubly thrilling for this critic, both from a historic standpoint and from a cinematic standpoint. The first image we see, in fact, was from a race film – a terrified black woman running down a country road, clearly in fear for her life. Although it was uncommon to discuss rape or portray it onscreen in those days, race films depicted it as a part of life because for black women, it was just that.

The state of Alabama would go on to issue an official apology for its handling of her case some 70 years after the fact but the movie doesn’t necessarily have an all-positive message; family members of the rapists still view the acts of their siblings as the actions of boys just acting like boys; things just got a little bit out of control, that’s all. It is disturbing that even now, approaching three quarters of a century later, there is no ownership of these heinous actions and no accepting of blame. One wonders if it would be any different for them if the victim had been white.

This is a movie that should be shown in every high school in America, not only because it graphically illustrates the ugly aspects of racism but also of sexism as well. All of the perpetrators of this crime were high school age. They regarded African-Americans as sub-human and women, particularly black women, as objects meant to be used to satisfy their carnal desires. We continue to live in a rape culture now; the real consequences of that  culture are excellently documented here. Adding to the tone is a brilliant pairing of Dinah Washington’s jagged “This Bitter Earth” with the elegiac strings of Max Richter’s On the Nature of Daylight.

It should also be said that the film’s title should warn those who are sensitive or prone to being triggered; while the description of Recy’s attack (and an attempted sexual assault on another woman) aren’t graphic, they may bring some painful and unwanted memories to the foreground. Be cautious in that regard.

Given the events at Charlottesville this past summer or the ongoing demonization of Black Lives Matter and of those protesting police brutality against African-Americans, there is little doubt that race relations in the Land of the Free still have a long, painful way to go. What I find most depressing is that while we may console ourselves that “these things happened 70 years ago, things are different now” I have my doubts that if a 24-year-old African-American wife and mother walking home from church in 2017 were to be raped by five white men that the outcome would be any different.

REASONS TO GO: The archival and “race film” footage is fascinating. Feimster is an eloquent and intelligent speaker. The film is powerful and moving. Here you’ll find a very specific and damning account of racism.
REASONS TO STAY: There are an awful lot of talking heads here. Although not graphic, the depictions of rape and attempted rape may be disturbing to survivors.
FAMILY VALUES: The movie contains descriptions of sexual assault and racially-motivated violence.
TRIVIAL PURSUIT: Buirski is the founder of the prestigious Full Frame Documentary Film Festival.
CRITICAL MASS: As of 10/2/17: Rotten Tomatoes: No score yet. Metacritic: No score yet.
COMPARISON SHOPPING: 13th
FINAL RATING: 8.5/10
NEXT: Columbus