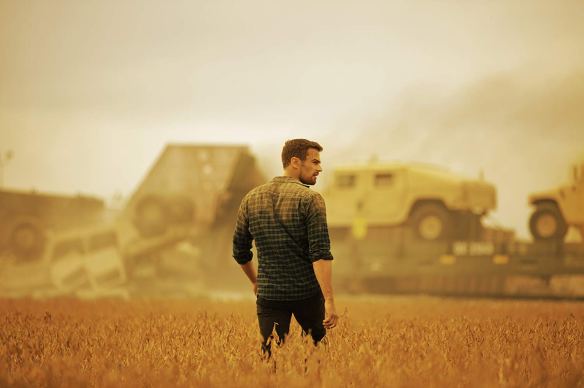 Theo James gets a glimpse of how it ends.

How will the world end? Will it go out with a bang or a thud? What will become of those who survive? These are questions that people have wondered about since…well, since there have been people. The movies wonder about it too, offering generally special effects-heavy looks at nuclear holocaust, approaching meteors, deadly plagues and so on and so forth. Sometimes the end of the world is the sound of the power being switched off.

Will (James) is a lawyer in Seattle whose girlfriend Samantha (Graham) is pregnant. They want to get married; she wants him to, in the best traditional sense, ask her father for her hand in marriage. That’s not something Will is especially looking forward to as Sam’s dad Tom (Whitaker) is a very conservative ex-Marine who doesn’t look with much favor upon Will who moved his baby girl all the way to Seattle and worse yet crashed his boat.

The meeting between potential father-in-law and son-in-law goes awkwardly and then falls apart. Will is about to head back home to Seattle and calls Sam to let her know he’s on his way when the phone call is abruptly cut off with Sam uttering a disturbing “Something’s wrong! I’m scared…” before the connection goes dead. Then the power goes off in Chicago and pretty much everywhere.

Tom, being a man of action, determines to drive to Seattle since air traffic is grounded. He gets Will to go with him, reluctantly at first. What they encounter in America’s heartland is nothing short of disturbing, with civilization falling apart, roaming bandits murdering and stealing with impunity and signs that the military has attempted to regain control unsuccessfully. The two manage to get Native American auto mechanic Ricki (Dove) to accompany them West in hopes that she can make it to California. Seattle’s in that general direction after all.

While this movie is beautifully shot (thank you cinematographer Peter Flinckenberg!) it feels like you’ve seen this movie before in a dozen disaster end of civilization films that have come before it. I don’t mind a movie borrowing ideas from other movies – after all, as Shakespeare once said, there is nothing new under the sun – but a movie needs to add something, something that at least reflects a point of view. At first, I thought that would be the relationship between Will and Tom which seems to be at the center of the film. And yes, Whitaker and James both put forth some fine performances which you would expect from Whitaker but James delivers what I think is his best performance so far. The problem is that the chemistry between the two is often cold; there should be more heat between them. After all, Tom neither likes nor trusts Will but grudgingly realizes he needs him if he is to save his baby girl – assuming she’s still around to be saved

There’s just too much typical post-apocalyptic cliché here, with people turning into selfish monsters willing to kill for anything that would allow them to survive for one day longer. There are signs that it didn’t all totally go tumbling down the drain – a small town which has essentially cut itself off from the chaos around it but one gets the sense they probably won’t be able to stand too long intact.

And I have to talk about the ending. I won’t reveal too much about it, only that it’s godawful and abrupt  You are left looking at whomever you are watching the movie with and wondering aloud “Why did I just watch this if that’s all there is?” Of course, you might ask the same question if viewing alone but the answer is likely to be you throwing your TV (or laptop) across the room in frustration. The moral is, don’t watch this alone.

That’s not to say that this is all bad; there are some poignant moments and Dove’s character Ricki actually has some memorable scenes but it gets lost a bit in the march to lawlessness. I think we all get that civilization is a terrifyingly thin veneer and that it won’t take much to strip it completely away. It just gets tiresome to see that concept being demonstrated over and over again with the characters refusing to learn that lesson along the way.

REASONS TO GO: Whitaker is as mesmerizing as always and James delivers his best performance to date.
REASONS TO STAY: The pace is a bit slow and the ending a bit abrupt.
FAMILY VALUES: There is all sorts of violence as well as profanity.
TRIVIAL PURSUIT: This was the first film to be directed by Chang-dong Lee since Shi in 2010.
BEYOND THE THEATER: Netflix
CRITICAL MASS: As of 1/28/19: Rotten Tomatoes: 20% positive reviews: Metacritic: 36/100.
COMPARISON SHOPPING: On the Beach
FINAL RATING: 6/10
NEXT: Solo: A Star Wars Story