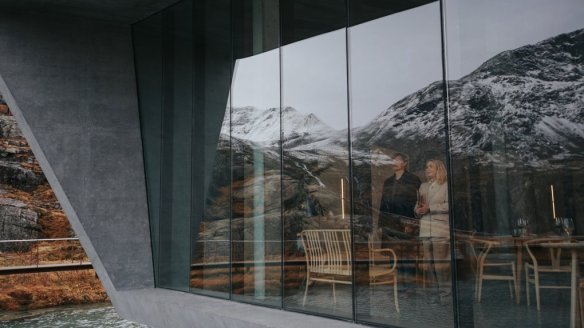 A cold and clinical beauty.

Sometimes, just coincidentally, more than one movie gets released at about the same time with a similar theme or subject matter, like Armageddon and Deep Impact. This week, there are two movies dealing with assisted suicide, or Death with Dignity (the previously reviewed Here Awhile is the other one). This is the second.

But whereas Here Awhile dealt with the subject as a straightforward drama, examining how the intention of ending one’s life affected those around them, this is something else. Max (Coster-Waldau) is an insurance investigator, although judging from his personality he might have been better suited to be an insurance company accountant. He has a pair of glasses and a moustache, and you think that a hunk like Coster-Waldau (Game of Thrones) would rock that look. Think Stephen Root in Office Space and you’ll understand nobody could rock this look.

A client of his company, Alice Dinesen (Richter) who most definitely did not have a farm in Africa, wants to collect the life insurance from her husband Arthur (Mossling), who has been missing for more than a year. The only evidence she has that he’s gone is a video that was mailed to her by the Hotel Aurora in which her husband announced that he was taking his own life and that by the time she receives the video he will be dead. Alas, there is no body so the company is not willing to pay – no corpse, no cash, as they like to say in the life insurance biz.

Max is only too happy to look into the hotel, because he has some thoughts in that direction as well. You see, Max has an inoperable brain tumor that is growing larger by the day and soon he will be looking at a loss of identity and dignity. After overhearing his significant other (Novotny) tell a friend that she doesn’t know how much longer she can put up with Max (she’s unaware of his medical condition), he decides he will take advantage of the hotel’s services.

At first, it seems like he’s made a good choice. The hotel is absolutely spectacular, nestled in the mountains of Scandinavia, a modern steel and glass beauty with comfortable Danish design. There are hot tubs for soaking, massage therapists, gourmet meals in a restaurant with a spectacular view, tea laced with opium – all the amenities of a five-star hotel. They offer a passing away experience that is painless (or painful, if that’s what he wants) in the environment of his choice. Sounds like a killer deal.

But Max is beginning to have second thoughts and things turn sinister. He is told “You can leave, but you cannot escape” which sounds to me like writer Rasmus Birch was listening to The Eagles’ “Hotel California” on an endless loop when he wrote this. He begins to see things that may or may not be there – or is that his tumor asserting itself? Or something else?

The writer and director made some odd choices for this film. For one, they take the charismatic Coster-Waldau, a handsome man with a charismatic screen presence, and reduce him to a milquetoast. Fans of Jamie Lannister are going to be throwing things at the screen, although to be fair I’m sure the fact that this role is as far from Jamie as it’s possible to get was part of the appeal for Coster-Waldau.

It’s also got terrific set and production design; the hotel is cold, clinical with odd warm accents but there is no feeling of humanity here. The hotel staff are largely smiling automatons who make the adjective “pleasant” a pejorative. The natural beauty around the hotel is nice as well, but the whole screen tone has a wintry feel, which I do believe is on purpose.

The movie has some high aspirations to examine the relationship between life and death, and the morality thereof. There are some hints of paranormal elements, but they never really come to fruition unless you decide that the fairly ambiguous ending means something along those lines (I’m being purposely vague here as not to spoil things) but if you take into account that a man with a brain tumor might not be the most reliable narrator, well, you do the math.

I have to say that although there were things I liked about the film, I do believe that in the end its reach exceeded its grasp. I don’t think the movie was a failure per se, but suffice to say that I don’t think that it was successful in what I believe it was aiming for. They swung for the fences but ended up legging out an infield single, in other words.

REASONS TO SEE: Possessed of a cold, sterile beauty.
REASONS TO AVOID: A little bit too clinical.
FAMILY VALUES: There are some adult themes as well as brief violence.
TRIVIAL PURSUIT: Coster-Waldau and Aramayo were both members of the sprawling Game of Thrones cast.
BEYOND THE THEATERS: Amazon, Fandango Now, Google Play, Microsoft, YouTube
CRITICAL MASS: As of 6/14/20: Rotten Tomatoes: 31% positive reviews, Metacritic: 39/100
COMPARISON SHOPPING: Dark City
FINAL RATING: 6.5/10
NEXT: Velvet Buzzsaw