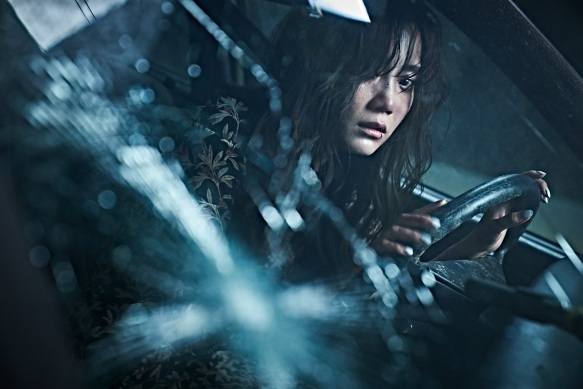 She drives all night.

South Korea has been quietly, without fanfare, turning into a world class film capitol. It’s no accident that the most recent Best Picture came from South Korea; the movies there have been getting better and better in quality over the past 15 years, and now can proudly be put up there with any on the planet.

This ensemble noir black comedy/drama/thriller starts off with a Louis Vuitton bag left in a sauna locker. The very put-upon attendant at the gym, Jung-Man (Bae) discovering that the bag is full of cash. Enough to make a lot of problems go away, and brother, does Jung-Man have problems. His mother is convinced that Jung-Man’s wife is trying to kill her, but only if her son’s fecklessness doesn’t kill her first; she’s convinced her flesh and blood can do nothing right. The kind of money that’s in the bag can get the bitter old woman into a facility for bitter old women and Jung-Man and his wife into a nicer home.

But how did that bag get there in the first place? Oh, that’s explained in a flashback as Tae-Young (W-s Jung), a customs inspector with the moral compass that always points at his own best interests, has fallen deeply into debt to mobster Du Man (Jeong). You see, Tae’s girlfriend, brothel owner Yeon-Hee (Jeon) ran out on her debt to Du Man after Tae-Young vouched for her, meaning that now he owes her debt. He must come up with the money quickly, and so he comes up with a scheme to defraud a sucker, whose girlfriend, Mi Ran (Bin) works in the brothel of Yeon-Hee. The sucker also beats her regularly, so she enlists a Chinese client to kill the boyfriend and make it look like an accident. There is also a greasy cop who is sure that something unsavory is going on, and there’s also a serial killer on the loose. Got all that so far?

It sounds like a mess and I’ll admit that early on, it’s a bit difficult to follow. You need to be on your toes and paying attention, but I promise you, it is truly worth it. The ending brings all these separate stories together and as things slowly begin to untangle, your first instinct will be “How did I not SEE that coming” before sinking into a satisfied smirk that you’ve lucked into watching one of the better crime movies in recent memory.

The ensemble cast is really good – there’s not a false note in any performance that I could see. The movie is so well-scripted and so perfectly plotted that even though you may sometimes have some doubts that the filmmakers can tie all this together, they do. That they do with as much style and humor as they do is a tribute to their filmmaking skills; I’d put this on the level of Tarantino and the Coen Brothers, two filmmakers who have clearly influenced Yong-hoon Kim a great deal.

REASONS TO SEE: An intricate plot that keeps you guessing. The ending is jaw-dropping.
REASONS TO AVOID: A bit of a slog at times (but worth it in the end).
FAMILY VALUES: There is some violence and profanity.
TRIVIAL PURSUIT: This is based on a novel by Japanese writer Keisuke Sone.
BEYOND THE THEATERS: Amazon, AppleTV, Google Play, Rakuten Viki
CRITICAL MASS: As of 12/3/20: Rotten Tomatoes: 100% positive reviews; Metacritic: No score yet.
COMPARISON SHOPPING: Knives Out
FINAL RATING: 8.5/10
NEXT: Recon