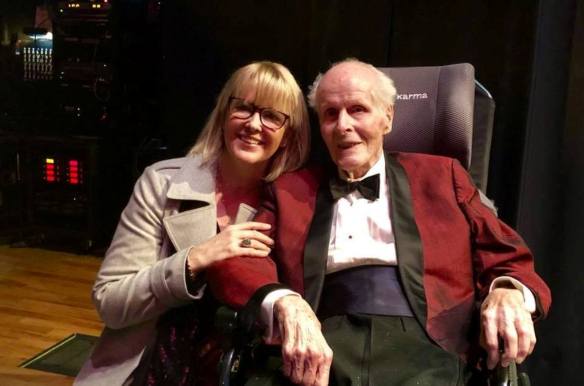 Bill Coors, Still a silver bullet as a centenarian.

Especially these days when it seems like there’s a very real class war going on in this country, we have a tendency to forget that the people in the 1% are just as human as we are. Some of them – a lot of them – are certainly driven by greed and an attempt to not only keep what they have but improve upon it, there are those who have had their share of suffering which has made them very different from those privileged few who cannot have any empathy for those in lesser economic brackets.

The grandfather of William Coors was Adolph Coors who founded the Coors Brewing Company in Golden, Colorado back in 1873. Bill’s dad, Adolph Jr. would inherit the plant from his father who committed suicide in 1929. Bill characterized his father as a stern and exacting disciplinarian who rarely displayed affection to anyone. As a result, Bill had a difficult time showing affection which would later end his first marriage.

Bill was always a success in business; under his stewardship Coors went from being a regional brewery to a national and even global presence; it is the second largest beer company in the United States and the fifth largest in the world. Having come from money, one would think he led a charmed life.

One would be wrong. Depression runs strongly in the Coors family and there were cracks in the facade; his grandfather, the founder of the company, committed suicide in 1929; his daughter did the same in 1983. His older brother Adolph III was murdered in 1960 during a botched kidnapping and his first wife Geraldine died of the effects of alcoholism shortly after they divorced.

Bill also suffered from depression all of his life but it became much more obvious following the death of his brother. He did an enormous amount of research in trying to find a way to overcome his mental health issue. The movie is largely based around an address he gave graduating students of the American Academy of Achievement in 1981; although no video exists of his speech, there is audio of it and it is played throughout the film. In it Bill details some of the critical aspects of overcoming depression and what he calls his eleventh commandment – “Honor Thyself.” He had felt that repeating business platitudes would be of less use and instead delivered an impassioned and highly personal address instead.

That may sound like the dictates of a privileged and entitled generation but in reality it’s a remarkably accurate distillation of what mental health professionals often advise their patients. Bill learned and passed on that in order to love others he must first learn to love himself, something that his unaffectionate father never gave him the tools to do.

Young people, many of them YouTube vloggers, as well as family members, employees, and those close to Bill also chime in with either their own depression stories (musician Amie Lee implores people to communicate when they feel something is wrong) or how Bill has improved their lives.

The main problem here is that the whole thing kind of feels like an infomercial with nothing to sell except Bill’s philosophy of life perhaps. For those who have seen self-help infomercials late at night on cable, this will seem a bit uncomfortably familiar from the music to the way the film is laid out. That does some disservice to the subject who one gets the sense is genuine in his concern for others who like himself suffer from depression.

This is kinda Bill Coors’ story and kinda not. I suspect it was more important to get his message out than to tell his story although he does so mainly to emphasize that it’s possible to beat depression. If you chose to see this documentary, it is unlikely what you expected to see. That in and of itself isn’t a bad thing but it can certainly affect how receptive you are to the message. I think the film would have been better served to take Bill’s name out of the title but perhaps the filmmakers were hoping the Coors name would give potential audiences the impression that this is a film about beer – and who doesn’t want to see a film about beer?

The movie is currently paying in New York City with engagements in Los Angeles, Denver and Seattle in upcoming weeks. It will also be available on VOD starting on November 1st. Check your favorite home video providers for availability.

REASONS TO GO: Coors has a very compelling and occasionally heartbreaking story and his message is a worthy one.
REASONS TO STAY: Plays more than a little bit like an infomercial.
FAMILY VALUES: There are some adult themes here.
TRIVIAL PURSUIT: Coors turned 102 years old shortly before the film was released
CRITICAL MASS: As of 10/9/18: Rotten Tomatoes: No score yet. Metacritic: No score yet.
COMPARISON SHOPPING: Good Fortune: The John Paul DeJoria Story
FINAL RATING: 6/10
NEXT: Pick of the Litter