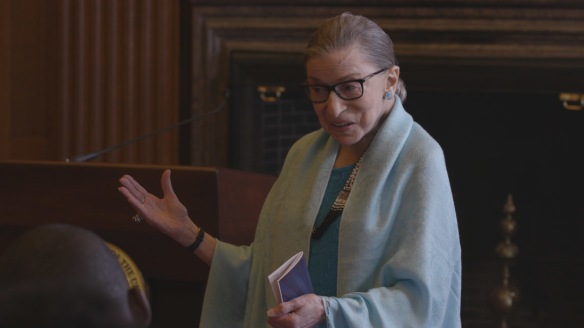 For the American left, Supreme Court Justice is an icon approaching rock star (or more correctly, rap star) status. In the last few years she has become something of a pop culture touchstone, with her beaded/lace justice robes (in place of ties) and her nickname “The Notorious RBG” taken from the name of a rap star.

The bookish and somewhat reserved Ginsburg is an unlikely pop icon but the truth is she has been a tireless crusader for gender equality her entire career, starting when she attended Harvard Law School in the 1950s as one of just nine women in a class of over 500. Since then she’s argued as a lawyer six cases before the then-all male Supreme Court, winning five of them.

She might never have been a Supreme Court justice (the oldest sitting on the court currently) had it not been for her husband Marty. As gregarious and outgoing as she was quiet, he was the yin to her yang. Although he sadly passed away in 2010, he used his contacts in the Bill Clinton administration to get his wife an interview for the vacant bench position. Clinton later realized in the first few moments of the interview that he knew he had his candidate. Marty and Ruth made a formidable team.

Since then she’s been one of the few liberal voices on a largely conservative court and has mostly penned minority opinions but those opinions have been some of the most thoughtful and well-researched legal papers of the last thirty years. Say what you want to about her politics; Ginsburg has a first class legal mind. The filmmakers do a particularly stellar job in presenting some of these opinions in an easy-to-digest manner, making sense of her legal arguments for laymen.

There is definitely more than a little lionizing going which is understandable – she has long been a hero to feminists and liberals – on here and much of the focus is on her gender equality work. While Ginsburg doesn’t really consider herself a radical feminist, she certainly believes very strongly that women should have the same opportunities as men and should be paid commensurately for their skills.

If I have a complaint about this film it’s that it makes Ginsburg out to be something of a one-trick pony, really glossing over other subjects she has also weighed in on in favor for her stances on women’s issues. The filmmakers do show her to have a bit of an impish sense of humor as she is bemused by her current status. We also get a sense of the closeness of her family who address her fondly as bubbe and take great delight in teasing her about her terrible cooking which she herself admits to. Everyone needs a flaw to be human, right?

While Cohen and West aren’t going to win any awards for outside the box documentary filmmaking with RBG, they did do something even the best documentarians sometimes fail to do; they gave us insight into their subject. That’s not necessarily an easy task especially given that their subject is notoriously reticent and fiercely private. I would have liked to get a bit more about how her progressive viewpoints came to be but essentially they came from her parents so I suppose that there isn’t a lot that Cohen and West could have done to elaborate further.

I suspect most readers who tend towards the right side of the political spectrum will want nothing to do with this movie and I can sympathize with that that. I tend to give the films of Dinesh D’Souza a miss since I disagree with his politics vehemently so I can’t condemn conservative viewers for doing the same thing I myself do. I can only say that one of the more charming sequences portrays Ginsburg’s long-time friendship with the late Antonin Scalia, her very conservative colleague on the bench. Some liberals do grouse about this sequence but I think it illustrates her willingness to understand all sides of an argument. If Ginsburg and Scalia could find a way to mutual respect and admiration (both were opera devotees) perhaps there’s hope for the rest of the country.

REASONS TO GO: The explanations of her legal decisions are superbly handled. While there is some hero worship going on, the subject comes off as very human. Certainly those of a leftist persuasion will enjoy this film.
REASONS TO STAY: There really isn’t a lot of explanation as to how she arrived at her progressive beliefs.
FAMILY VALUES: There is some content discussing controversial subjects.
TRIVIAL PURSUIT: Ginsburg was one of nine women to graduate in the Harvard Law School class of 1956 with over 500 men.
CRITICAL MASS: As of 5/16/18: Rotten Tomatoes: 94% positive reviews: Metacritic: 72/100.
COMPARISON SHOPPING: Best of Enemies
FINAL RATING: 9/10
NEXT: Lean on Pete