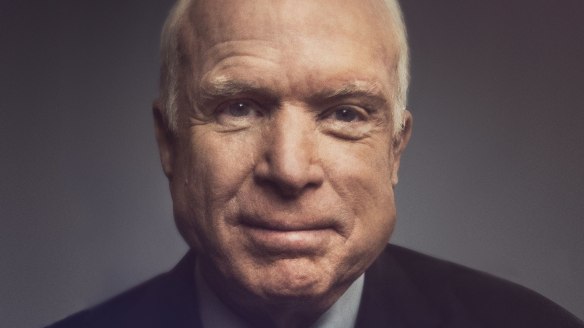 Senator John McCain of Arizona; portrait of a maverick.

Most people who follow American politics are pretty well familiar with the salient points of Arizona Senator John McCain’s life; the son of a four-star admiral (and also the grandson of one), he became a Navy flyer during the Vietnam War. Captured by the Viet Cong, he was held as a prisoner of war for five and a half years, subjected to repeated torture and abuse. Finally weakened to the point where he could no longer take it, he signed a bogus confession – an act that has regretted ever since – and returned home to take on a political career. Running twice unsuccessfully for the Presidency, he won the Republican nomination in 2008 and unwisely selected then-Alaska governor Sarah Palin as his running mate, an act that changed the political landscape of the United States and not for the better. Last year, he was diagnosed with a particularly aggressive form of brain cancer.

It is difficult to review a documentary about a man without reviewing the man himself. Those who read my reviews regularly should be aware that I am a progressive liberal so politically McCain and I disagree about a lot of things. I have never considered him anything less than an honorable man however; famously, he showed up for a vote that kept the Senate from passing  a bill that would have dismantled the Affordable Care Act and put in an absolute abomination of a replacement plan in its place, breaking ranks with his fellow Republicans and earning the wrath of President Trump who clearly dislikes the Arizona senator.

The movie utilizes a lot of archival footage, particularly from McCain’s Vietnam era, and a lot of interviews with political foes, allies, friends and family. Some of McCain’s closest friends come from the other side of the aisle; Joe Biden, for example and Joe Lieberman whom he toyed with asking to be his running mate in ’08 before settling on Palin. The movie also covers one of his more public blunders, his role in the Keating Five scandal which nearly marked the end of his political career. McCain is honest about his involvement and while he was exonerated of any wrongdoing, he admits freely to making an error in judgement which he was censured for.

Clearly the filmmakers admire McCain which I believe most Americans do; even the left respect his service and his willingness to vote his conscience, something few members of either party are willing to do these days. It’s not strictly speaking hagiographic but it is fawning in places and certainly admiring throughout. Then again, it’s hard not to admire a man like John McCain…oh, wait a minute, there I go reviewing the man rather than the movie. It’s a pretty decent documentary. HBO subscribers, particularly those of a political bent, should check it out.

REASONS TO GO: This doesn’t feel like a puff piece at all.
REASONS TO STAY: It seems to be a story that is still being written.
FAMILY VALUES: There is a fair amount of profanity.
TRIVIAL PURSUIT: The title refers to the book by Ernest Hemingway which is McCain’s favorite.
BEYOND THE THEATERS: HBO Go
CRITICAL MASS: As of 7/23/18: Rotten Tomatoes: 92% positive reviews. Metacritic: No score yet.
COMPARISON SHOPPING: Mitt
FINAL RATING: 6/10
NEXT: The Depths 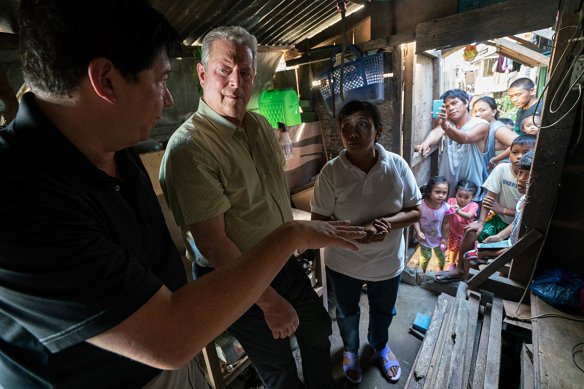 Al Gore checking out the effects of climate change directly in the Philippines.

Climate change has been a hot button topic in this country ever since Al Gore’s Oscar-winning documentary An Inconvenient Truth brought his slideshow to the mainstream back in 2006. Now, more than a decade after the fact, the follow-up looks at what has been done to combat the crisis and in a lot of cases the answer is “Not a lot.”

We see Gore giving speeches and preaching largely to the choir; some folks on the other side of the aisle listen indulgently but really facts and figures aren’t making much headway with them. Gore shows himself to be a tireless worker for the cause; there is no denying his commitment to change nor his willingness to go wherever needed and do whatever needs doing. It’s good to know that there are people like Gore in the planet’s corner.

On the other hand, there are some terrifying images; Gore on a glacier that is melting away, wading in high tide waters in the streets of Miami with fish swimming placidly by. Filmed largely during the 2015 Paris Climate Change Summit where the historic accords were signed and through the 2016 election, we see Gore’s optimism at the signing of the Accords turn to dust when Trump, who is heard early on outlining his belief that climate change is a boondoggle meant to bilk American industry and the American government out of billions of dollars. Knowing that every other nation on the planet has adopted the Accords and we remain the naughty children who actually want coal for Christmas may be depressing as hell to left-leaning viewers. However no matter what side of the aisle your politics are you can certainly appreciate how extraordinary it was to get so many industrial nations to agree on one thing as they did at the Accords.

Right-leaning viewers – if they even bother to view this at all – may look at it as propaganda and in a very real sense it is. There is no doubt what the point of view of the film is or its opinions regarding the subject but while this could easily be a depressing “state of the planet” address (and parts of it are just that) there is a lot of hopefulness here. The filmmakers take great pains to describe how all of us can take action right now and still have a major effect on our planet’s health. However, there is no doubt that the federal government will continue to be part of the problem so long as those who favor profit over survival are in power.

REASONS TO GO: There is no doubt that Gore is committed and passionate on the subject of climate change. Rather than just presenting terrifying facts, the film gives some real world ways in which the crisis can be addressed. Some of the images are absolutely stunning.
REASONS TO STAY: Climate change deniers will likely find this offensive.
FAMILY VALUES: Children may find the themes and some of the images frightening.
TRIVIAL PURSUIT: The film debuted at this year’s Sundance Film Festival where it received two standing ovations.
BEYOND THE THEATERS: Amazon, Fandango Now, Google Play, iTunes, Microsoft, Paramount Movies, Vudu, YouTube
CRITICAL MASS: As of 12/30/17: Rotten Tomatoes: 79% positive reviews. Metacritic: 68/100.
COMPARISON SHOPPING: Chasing Ice
FINAL RATING: 8/10
NEXT: The Hitman’s Bodyguard