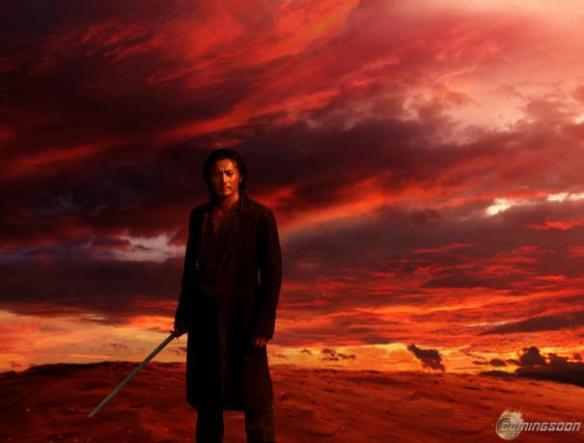 If you see this guy with this backdrop behind him, that's your clue to turn and run!

Asian filmmakers have gotten a reputation for fearlessly mashing up genres into sometimes confusing but occasionally delectable new brews and so it is here. An assassin from the East is forced to hide out in a small town in the American badlands of the Old West. As usually happens when taciturn strangers hiding out in small towns in the Old West, his troubles find him there and all Hell literally breaks loose.

(Roadside Attractions) Bjorn Lomborg, Freeman Dyson, Richard Lindzen, Paul Reiter. The author of “The Skeptical Environmentalist,” controversial economist Bjorn Lomborg, is profiled here as he takes on the issue of global warming. Taking the point of view of a realist, he comes up with some different ideas on solutions to the problem while earning the wrath of liberals and what he views to be alarmists everywhere.

(Oscilloscope Laboratories) James Franco, Mary-Louise Parker, Jon Hamm, Jeff Daniels. Beat poet Allen Ginsberg’s epic poem “Howl” ignited a firestorm of controversy and led to an obscenity trial that would eventually define the American literary landscape for the years that followed. Franco, who has been receiving Oscar buzz for 127 Hours, is having himself quite a year.

(CanZion) Gonzalo Senestrari, Irina Alonso, Fernando Ronsarolli, Gian Franco. A young Argentinean is raised by a distant father who was always working and a mother whose devotion to her faith overrides all. When she rejects his dreams of becoming a heavy metal musician, a rift develops between the two that lead to a whole lot of bad life choices. This story, based on actual events in the life of heavy metal musician Pablo Olivares of the acclaimed group Halogen, is about the healing of that rift and the battle for a young man’s soul.

Rating: PG-13 (for some thematic material and violent content)

Welcome to the Rileys

(Goldwyn) James Gandolfini, Melissa Leo, Kristen Stewart, Ally Sheedy. A happily married couple has seen their marriage slowly begin to spiral into disintegration after the loss of their daughter eight years previously. The mother has become an agoraphobic while the father has become so numb to the world he doesn’t seem to care about anything or anyone. While on a business trip to New Orleans, he meets a teenage runaway and forms a platonic bond with her. What could have been the straw that breaks the camel’s back could turn into the inspiration to save their relationship.