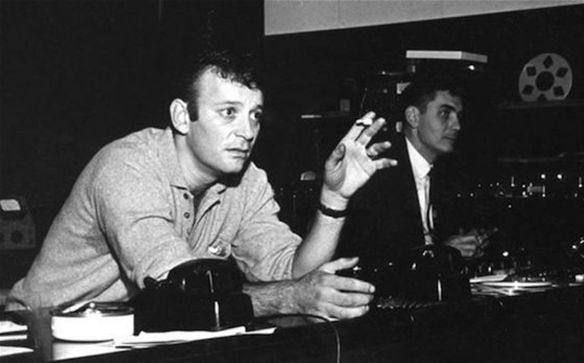 This is what producing a classic rock track looks like.

We know who the great performers of the rock and roll/R&B era are. We know their faces, we know their music. The people who are behind the scenes may not necessarily be as well known other than a few like Phil Spector and George Martin.

Chances are that very few of you reading this have ever heard of Bert Berns, but you certainly know his music as both a songwriter and producer. He’s responsible for such classic songs as “Twist and Shout,” “Under the Boardwalk,” “I Want Candy” and “Piece of My Heart.” His career spanned a mere eight years but in that time he completely remade music in his image.

Berns was a Jewish kid from the Bronx and the last guy you’d think of as a one of the movers and shakers of soul music in the 60s, but truth is a strange motha. He was stricken with rheumatic fever as a boy and his heart was severely damaged. He spent most of his convalescence learning to play guitar and piano. His doctors warned his parents that it was unlikely he would survive past his teens; they were proven wrong but not by much.

In the 50s he fell in love with Cuban music, particularly the mambo. He brought that love of Latin rhythms into his music. He sort of slid into the music business sideways, working as a $50 a week songwriter for a tiny New York publishing firm. He wrote a couple of songs that got mild airplay, including the novelty hit “A Little Bit of Soap.” He eventually was brought to the attention of Atlantic Records, then the giant of R&B music. One of the first songs he wrote while employed by them was “Twist and Shout.” It was brought to Phil Spector who did a version that ended up somewhat lame. Horrified, Berns determined to produce the records made of his songs. He took the Isley Brothers into the studio and did the song up right. A legend was born.

The documentary is definitely a labor of love, co-directed by his son Brett. The film is largely a parade of talking heads interspersed with archival stills but that’s largely a necessity. There wasn’t a lot of behind the scenes footage taken back then and performance video wouldn’t become a regular thing until the MTV era.

We get to hear from those who worked with Berns, from performers to engineers. We also hear from his siblings and most importantly, from his wife Ilene – a former go-go dancer. She pulls no punches and gets emotional talking about certain aspects of his life. She has a take-no-crap attitude that isn’t uncommon among true New Yorkers and compared to some of the others interviewed who are more circumspect, her testimony is rather refreshing.

The music business is full of sharks and Berns rapidly learned to swim with them. His friendship with Carmen de Noia was helpful to his career; while de Noia wasn’t a made man he was the sort of guy who knew a guy, if you get my meaning. Ilene had danced in a club owned by Morris Levy, not just the chief of Roulette Records but the front of the mob in the music business. Bert wasn’t uncomfortable rubbing elbows with these sorts. De Noia also is interviewed for the film and other than Ilene is the most interesting tale-teller of the lot.

Berns died way too young, his heart finally giving out on December 30, 1967 at the age of 38. It’s always the brightest flames that burn out the soonest. Moreover, he knew that his life would end prematurely – he beat the odds in surviving as long as he did. In fact, “Piece of My Heart” is actually about his heart condition, but there’s no need to feel sorry for him. In his time, he nurtured and developed the careers of Neil Diamond and Van Morrison; he also was one of the most prolific and successful producers in the history of Atlantic Records; he remains one of the few people who ever partnered with the main trio of Ahmet Ertegun, Jerry Wexler and Nesuhi Ertegun in founding Bang Records, a subsidiary of Atlantic and the namesake of the documentary.

His legacy is mainly in the music and the soundtrack is packed with it. It’s music that made the music of today what it is. You may not know the name of Bert Berns but you know his music and chances are, you love it. One viewing of this film and you won’t forget his name anytime soon. I guarantee you won’t want to.

REASONS TO GO: A soundtrack that is absolutely stellar. One of the forgotten geniuses of rock and roll finally gets his due.
REASONS TO STAY: The movie is basically a parade of talking heads.
FAMILY VALUES: Some mild profanity and lots and lots of smoking.
TRIVIAL PURSUIT: The Berns-written hit “I Want Candy” got its title from a risqué book by Terry Southern.
CRITICAL MASS: As of 4/26/17: Rotten Tomatoes: No score yet. Metacritic: No score yet.
COMPARISON SHOPPING: The Wrecking Crew
FINAL RATING: 7/10
NEXT: Circus Kid 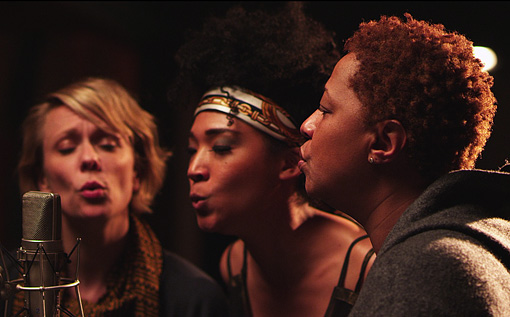 We all know the stars. Their faces, their voices, their music. We can hum their songs in our sleep. We don’t always get the full components of what goes into that classic music however. We rarely know who the backup singers are.

This documentary aims to rectify that. Focusing mainly on four African-American women, the movie looks at the importance of back-up singers to popular music of the last say, 50 years or so. There’s Darlene Love, for example, who not only sang leads on a lot of classic songs (“Christmas (Baby Please Come Home)” comes to mind) but her voice can be heard on some of Phil Spector’s classic hits – as part of The Blossoms, an early girl group she fronted, her powerful voice decorated some of the classic songs of the ’60s. Still, she’s primarily known as playing Danny Glover’s wife on the Lethal Weapon films.

Merry Clayton, like many of the great backup singers the daughter of a preacher, is perhaps best remembered as the female voice on the Rolling Stones classic “Gimme Shelter” for which she was awakened in the middle of the night to do and sang in pajamas and curlers.  She’s sang for some of the biggest names in music and while her face may not be familiar, I guarantee you’ve heard her voice many times.

Lisa Fisher may have the most amazing voice of them all. While much in demand (she has been the Stones’ touring backup vocalist for more than 20 years) she has for the most part shunned a solo career (although she won a Grammy for her lone solo album). She prefers to sing for the simple joy of singing, preferring to remain in the background rather than pursuing the solo career she more than has the talent to achieve.

Judith Hill famously sang at Michael Jackson’s memorial service and is heavily featured in the documentary of the rehearsals for his final tour that never happened due to his untimely death. She writes and performs not only for herself but for other big stars and recently became a contestant on the singing competition The Voice which I would count her a heavy favorite to win it all.

These women and many others like them (and a few men too) may not be well known but they are absolute titans in the industry. The respect that is paid them by the stars who are interviewed is palpable and as is mentioned by Claudia Lennear during the film, most people when they’re singing along to a song are singing what the backup singers are singing.

I will confess to having been a music critic for nearly a dozen years in the San Francisco Bay Area and like most people – critics included – I kind of took the contributions of these amazing singers for granted. One of the best thing this movie does is break down the importance of the background singers in the song. One stark illustration of this is found when ”Gimme Shelter” is played with the tracks removed one at a time until only Clayton’s vocal track remains. It’s a very simple yet effective reminder of the power of the human voice.

The human connection through music is universal. There are those who feel a particular passion for it and have the talent and the desire to express themselves through their music. Some of them make it and some of them don’t regardless of how good they are – it’s largely a matter of luck and timing. For my money, regardless of the fame and fortune these ladies and others like them have gathered (or lack thereof) they are every one of them stars in my book. If you love rock and roll or hell, any sort of pop music, you owe it to yourself to see this. It will change your outlook on music – in a good way – forever.

REASONS TO GO: Amazing music and spiritually uplifting. Everything a documentary should be.

REASONS TO STAY: If musical documentaries don’t interest you…

FAMILY VALUES:  There are a few swear words and some brief nudity.

TRIVIAL PURSUIT: Producer Gil Friesen, the former head of A&M records, came up with the idea and title after attending a Leonard Cohen show with his friend Jimmy Buffett. Unfortunately, Friesen passed away shortly before the film debuted at Sundance earlier this year.

CRITICAL MASS: As of 4/6/13: Rotten Tomatoes: no score yet. Metacritic: no score yet; the film has appeared at Sundance but won’t see theatrical release until June 14th but frankly, I don’t see critics not falling in love with this early Oscar contender.

NEXT: Nancy, Please and more from the 2013 Florida Film Festival