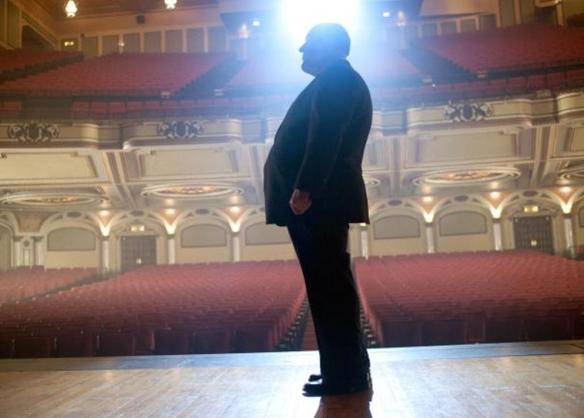 Alfred Hitchcock is one of the most decorated and respected directors in the history of movies. We are familiar with him as a man mainly through his television show and his dry sense of humor, his cameo appearances in his own movies such as Vertigo, The Man Who Knew Too Much and Strangers on a Train. Few know that as he finished another triumph, North by Northwest, he was aching to redefine himself. He managed to do that with a little movie called Psycho.

Hitchcock (Hopkins) and his wife Alma Reville (Mirren) are reveling in the acclaim for his latest picture. Like the wives of many great men, Alma contributes a great deal to his success although she has been content to remain out of the limelight. However, Hitch’s colossal ego and womanizing has frayed her patience to the breaking point. She assumes he will take on another suspense film for which he has become justly famous.

However, her husband yearns to stretch his wings somewhat which doesn’t bother you – when she discovers that his next project will be based on the Robert Bloch novel Psycho she is horrified. The movie is about a serial killer (who is in turn based on Ed Gein (Wincott) who has been haunting Hitch’s dreams of late) which in that era was unheard of. Until then, movies took the point of view of those who chased killers, not of the killers themselves and particularly not those who were clearly insane.

But as usual, Hitchcock gets his way. However, the studio shares Alma’s concerns. Hitchcock is forced to finance the film himself with Paramount acting only as a distributor. He sets out to assemble the cast which will include Anthony Hopkins (D’Arcy), Janet Leigh (Johansson) and Vera Miles (Biel). The latter Hitchcock had worked with before – until she had dropped out of the production due to her pregnancy, incurring the wrath of the director and he didn’t mean to let her forget it.

Because Hitch is paying for this, things are done on the cheap. Black and white film stock in an era of color. Filming on the Universal lot rather than Paramount’s because studio space is cheaper there. First-time screenwriter Joseph Stefano (Macchio).

But while something amazing is taking shape onscreen, things are in chaos at home. Alma is not just feeling taken for granted, she’s feeling downright ignored. Her contributions, normally appreciated and vital, are being virtually unheard. She is feeling somewhat obsolete, particularly as Hitch pays more attention to Leigh. Alma begins to develop a relationship with budding screenwriter Whitfield Cook (Huston) which drives Hitch crazy with jealousy. Still, as the film comes towards completion, will the movie vindicate the director’s vision – and will it be enough to save his marriage?

History shows that it did and Hitch remained married to Alma until his death in 1980. Psycho remains to this day the most profitable black and white sound film ever and in some ways is the film most identified with Hitchcock. As I mentioned in my review (see link above) this is the movie that ushered in the modern horror genre in many ways with the serial killer POV, the death at an early stage of the film of a lead character, excessive violence (although it seems tame today) and the psychosexual aspects of murder.

But this is a film about that film so we must talk about Hopkins as Hitchcock. Hopkins is one of the ablest actors of our time, having mastered characters both villainous and kind. He assays the character of Hitchcock with the use of a fat suit (Hopkins had just completed a weight loss program and was loathe to gain a significant amount of weight to take on the part of the portly Hitchcock) and an uncanny mimicry of the director’s mannerisms. Does he capture the essence of Hitchcock? I think so, insofar as we know what the essence of Hitchcock is.

There’s the rub, in fact. No disrespect to Hopkins, Hitchcock was and remains an enigma in many ways. He was a very public figure but we never really got to know the man. Sure, there are lots of biographies that talk about his obsession with his leading ladies (that were nearly always blondes), his difficult relationship with his mother, his tyrannical style as a director, his flirtatious nature which most people today would say bordered on sexual harassment. However there is precious little information direct from the source – Hitchcock disliked talking about himself except in very broad terms. Most of the more intensely personal information that Hitchcock ever revealed was in an interview by French director Francois Truffaut years later. Hopkins gives a game try but he’s hampered from the get-go.

Mirren is a different matter. She has as much onscreen personality as any actress alive, perhaps the most of any. She’s like a hurricane bearing down on a peaceful fishing village and as Alma nags Hitch about his weight and drinking, expresses her opinions about the risks he’s taking with their savings and his career or quietly standing off to the side in his shadow, Mirren makes us understand that she was a formidable woman indeed and every part as necessary to Hitchcock’s success as the director himself.

We see a bit of the filming of the movie – oddly the iconic shower scene gets very little time here – but then again this isn’t really a nuts and bolts primer about the making of a movie. It’s about how movies get made and in particular this one, which followed a somewhat torturous path to completion. Film buffs will probably be curious to see this but might be disappointed. For one thing, it misses out on some interesting aspects, like Hitchcock submitting an anonymous bid to Bloch for the rights so he could low-ball the author. For another, it does fudge on history although one of the items that critics have been disparaging the most – Alma’s relationship with Cook – is actually true, verified by correspondence between the two.

I found the movie to be an entertainment more than a historical document. As the former, this is a winner. Although I never believed for a moment I was watching the Master of Suspense at work, I felt like I was watching how he might have worked and I am satisfied I got some insight into his creative process. However, as the latter, I don’t think this stands up nor do I think it was meant to. There is enough here to be informative as to how the movie came together and we see some aspects of Hitchcock but again I don’t think we get a very complete portrait of the man. Then again, an hour and a half is really an insufficient amount of time to really get a complete picture of anyone.

WHY RENT THIS: A fascinating look at the creative process behind one of the most iconic films ever made. Mirren is a force of nature. Of interest to film buffs.
WHY RENT SOMETHING ELSE: Really doesn’t give a lot of insight to Hitchcock the man. Fudges a little bit on history.
FAMILY VALUES: Some cinematic images of violence, a bit of sexuality and some language.
TRIVIAL PURSUIT: Scenes set in Hitchcock’s office on the Paramount lot were filmed in the late director’s actual offices, which are still there.
NOTABLE HOME VIDEO EXTRAS: There’s an amusing cell phone PSA.
BOX OFFICE PERFORMANCE: $23.6M on an unknown production budget.
SITES TO SEE: Netflix (DVD/Blu-Ray rental only), Amazon (rent/buy), Vudu (rent/buy),  iTunes (rent/buy), Flixster (rent/buy), Target Ticket (purchase only)
COMPARISON SHOPPING: Shadow of the Vampire
FINAL RATING: 8/10
NEXT: Darling Companion