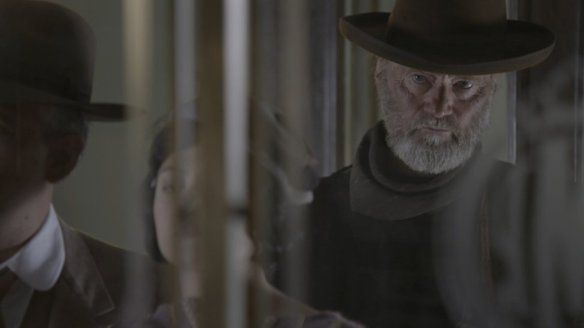 Westerns have been an important part of the movies ever since Thomas Edison invented the damn things. They have been iconic representations of America and the rugged individualism of Americans in general. They have fallen out of favor lately as we have changed as a nation and for better or for worse, our values are different now.

However when he receives word that his former lover Etta Place (McElligott) has passed away, he yearns to return home and visit her son Ryan who may or may not be his. He sells his horses and is returning back to his village, he is ambushed by Eduardo (Noriega), a Spanish mining engineer who insists he is shooting at men who are pursuing him, thinking that James was one. Unfortunately in the fracas, James’ horse Cinco bolts off with the money. Eduardo offers to share part of the $50,000 he stole from the mine owner Simon Patino, a Bolivian industrialist and mine operator (who actually existed, by the way) if Blackthorn can get him to the abandoned mine where the money is hidden. Needing the cash to get home, Blackthorn agrees.

The journey will take the two men across the high plains of Bolivia where they will be pursued by Patino’s relentless posse. Blackthorn will come face to face with old enemies and new lovers and more to the point, will be faced with a choice that will cut to the heart of who he always has been – and may change who he has become.

This is the English language debut of Spanish director Gil and it is somewhat fitting that he has chosen a Western to do it in. Westerns, many of which were shot in Spain during the 60s and 70s, have remained a favorite there more than here. Using one that has roots in the real American West is a note of gracia that those with Spanish souls will appreciate.

Shepard is perfectly cast as the grizzled, battle-hardened outlaw who wants nothing more than to live out the rest of his life in peace. He has the kind of face that hints at hard days and harder nights and Shepard uses his own persona as a kind of a springboard here. The ghost of Paul Newman and Butch Cassidy and the Sundance Kid hangs heavily over the production but while this is in a sense a sequel, it also is a completely different movie. This is kind of a what-if and I suppose that the original George Roy Hill movie was a little bit like that but while that movie was a product of a different time, so too is this movie a product of this time. It has kind of a somber disposition which some may find leaning too much in that direction. Caveat emptor.

Rea, who plays a former Pinkerton detective who always believed Butch was still alive, also is fine in support. Noriega is a decent enough actor but his chemistry with Shepard is a bit constrained; in many ways his character was a bit superfluous and while his robbery of the mine money is the catalyst of the events here, I can’t help but wonder if the filmmakers had concentrated on Butch/Blackthorn that this wouldn’t have been a better movie. It definitely would have been better if they’d eliminated the flashbacks to a younger Butch and Sundance which do nothing for the film other than interrupt what momentum it does achieve.

Mostly filmed in Bolivia, the scenery is absolutely gorgeous and for anyone thinking of traveling to Bolivia or who have fond memories of it, this is going to be a must-see. In fact, for those who just like Westerns or movies with magnificent scenery, this is one to keep an eye out for in general.

WHY RENT THIS: Shepard is terrific and perfectly cast. Rea is fine in support. Lovely Bolivian scenery.
WHY RENT SOMETHING ELSE: Flashbacks bring the film to a grinding halt. Chemistry between Shepard and Noriega not up to snuff. A little too somber in places.
FAMILY VALUES: There’s some rootin’, some tootin’ and some shootin’. There’s also a fair amount of cussin’.
TRIVIAL PURSUIT: The survival of Cassidy in the Bolivian shoot-out is based on actual rumors. The details on the supposed shoot-out are very vague and much of the evidence conflicts so it is entirely possible that the notorious outlaw survived.
NOTABLE DVD EXTRAS: There are a couple of short films from Gil as well as an HD-Net special on the film.
BOX OFFICE PERFORMANCE: $623,528 on an unknown production budget.
SITES TO SEE: Netflix (DVD/Blu-Ray Rental/Streaming), Amazon (stream only), Vudu (rent/buy),  iTunes (rent/buy), Target Ticket (rent/buy)
COMPARISON SHOPPING: The Shootist
FINAL RATING: 6/10
NEXT: Inherent Vice