(New Line) Miranda Otto, Anthony LaPaglia, Stephanie Sigman, Talitha Bateman. A dollmaker and his wife are struck by a horrible tragedy when their little girl dies in a car accident. Grieving for years, they eventually open their home to a nun and several girls from an orphanage who need a place to stay. However, the dollmaker and his wife are hiding a terrible secret; in a moment of weakness, they allowed what they thought was the spirit of their deceased daughter to inhabit a doll they call Annabelle. But what lives inside Annabelle is something far more evil. Quietly, the Conjuring universe has become a very lucrative horror franchise with spin-offs and sequels in the works. August 11 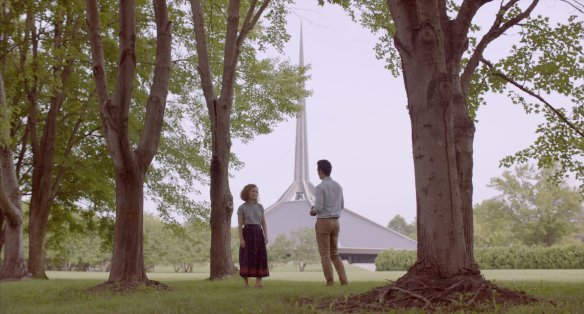 (Superlative) John Cho, Haley Lu Richardson, Parker Posey, Rory Culkin. Some movies are visceral and gritty; others are almost like daydreams washing over you like an incoming tide on a tropical beach. Columbus is like that as a young Korean man goes to Columbus, Indiana where his estranged father – a famous architect – lies in a coma. There he meets a bright young woman with a promising future who has her whole life ahead of her but is choosing to stay in Columbus to care for her drug-addicted mother. This movie was one of the most talked-about films at this year’s Sundance Film Festival. August 4

(Netflix) Bryan Fogel, Grigory Rodchenkov, Nikita Kamaev. A chance meeting with a Russian scientist led journalist Bryan Fogel into a netherworld of sports doping. As the story started to take the twists and turns of a Cold War-era spy thriller, people connected with the story began to turn up dead. One of the greatest scandals in the history of sports unravels before your eyes in this highly anticipated Netflix documentary. August 4

The Only Living Boy in New York

(Roadside Attractions) Callum Turner, Jeff Bridges, Pierce Brosnan, Kate Beckinsale. A recent college graduate tries desperately to find himself at home in New York City. Despite the best efforts of his parents – or maybe because of them – he finds himself adrift. When he falls in love with a beautiful young girl whose only interest in him is platonic he feels doubly lost but then he discovers that his father is having an affair with a beautiful woman and when he stalks her and eventually begins to interact with her, his whole life changes. This is the latest from director Marc Webb who wowed me with his (500) Days of Summer. August 11

Dave Made a Maze

(Gravitas) Nick Thune, Stephanie Allynne, Kirsten Vangsness, Scott Krinsky. One of the most imaginative and enjoyable films to come out of this year’s Florida Film Festival gets its theatrical release. Dave, a kind of aimless drifter, constructs a cardboard maze in his living room one boring weekend while his girlfriend is out of town. When she comes home, she discovers that he has become lost in the maze which is much larger on the inside. Enlisting some of his hipster friends, she mounts a rescue expedition over his objections – you see, this labyrinth comes complete with a minotaur. You can read my review of the film here. August 18

(Neon) Harris Dickinson, Madeline Weinstein, Kate Hodge, Neal Huff. A young man living on the outskirts of Brooklyn struggles to find his own identity, desperate to escape a stagnant home life. Caught between his delinquent friends, a potential new girlfriend and older men he meets online, he is left with a choice to be who he is or to be who everyone else wants him to be. This was one of the unsung films to come out of Sundance but it could wind up having some Oscar implications later this year. August 25