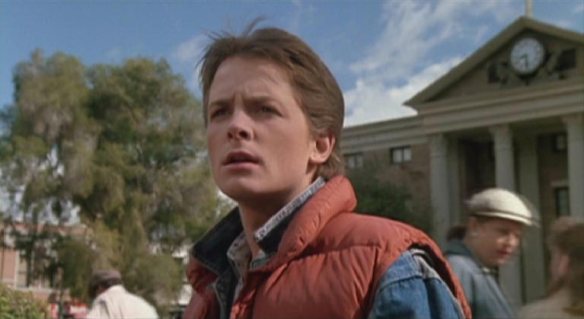 Michael J. Fox is going back in time.

Most people my age and slightly younger have a real soft spot for Back to the Future. One of the biggest box office successes of 1985, the movie has become a treasured icon of its age, a movie very much associated with the decade despite its time-travelling motif. Younger generations are well-versed with the film mostly from frequent cable and broadcast TV appearances as well as from their parents VHS and DVD collections. Either way, there are few movies of the last 30 years that have resonated the way this one did.

Marty McFly (Fox) is a frustrated high school senior. He lives in a kind of middle class hell, his mom Lorraine (Thompson) a somewhat prudish, somewhat bitter woman who knows the best days of her life are behind her. His father George (Glover) is a picked-on milquetoast who allows his boss, Biff Tannen (Wilson) to abuse him mercilessly, taking credit for work that George does. Marty yearns for something better, whether it be through rock and roll or through his girlfriend Jennifer (Wells). Even the town he lives in, Hill Valley, is in a state of decrepitude; its clock tower that was once the crown jewel of the town square hasn’t worked for decades since a chance lightning strike left it inoperable.

He is also friends with Dr. Emmett “Doc” Brown (Lloyd), considered to be a crackpot by most (and it’s kind of understandable) but he’s been doing some research into time travel and thinks he’s found a way to make it work. Through a series of accidents, Marty gets into the time machine (which is in, appropriately enough, a Delorean) and is sent back to the year 1955. Through a further series of mishaps, Marty manages to prevent his parents from meeting and instead takes his father’s place convalescing in the home of his mom, who instead of falling in love with his dad falls in love with Marty himself.

Without plutonium for the reaction, Marty is stuck in 1955 but he may not be for long – if he can’t get his parents to meet and kiss on the dance floor of the Enchantment Under the Sea dance, he’ll never have been born. And even if he does get them together, how is he going to get back home to 1985?

Zemeckis and Gale were at the top of their game here and for Fox it is the role that he is most associated with, maybe even more so than Alex Keaton from Family Ties. The movie was kind of a perfect storm of elements coming together in just the right way. It was a movie that fit the time, but it was also much more than just a sci-fi adventure flick with lots of thrills and great characters, although it is that as well. The movie was supposedly inspired by writer/producer Bob Gale finding one of his father’s high school yearbooks and wondering if he had known his dad back then would they have hung out together, an intriguing concept.

We rarely think of our parents as people, but they were all young once; they all had the bloom of youth in their cheeks, all had hopes and dreams, all loved and lost, all got into trouble with their own parents and all did exactly the same kinds of things you did yourself. We can’t really put them in that perspective however; we need our parents to be parents. It’s hard to see them as young kids who didn’t have all the answers and weren’t always right. We can’t see them as ourselves.

This movie kind of forces you to look at them that way and realize what a crap shoot it is that you even exist; one missed connection and you’d never have been born. But at the same time, it’s a fun ride (so fun that it became a ride at Universal Studios theme parks although they have since replaced it with Simpsons -themed rides) that never lets up and is huge fun from minute one to closing credits. Movies like that are few and far between. From the Huey Lewis and the News songs to the eccentricities of Doc Brown to the awkward humor of having Marty being hit on by his mom (which offended some critics at the time), the movie remains an icon of the 80s and if it is a bit anachronistic with its Delorean time machine, Walkman cassette player and Libyan terrorists, it is no more so than most movies which are all without exception a product of their times. This is a classic that should be an essential part of any collection.

WHY RENT THIS: An absolute classic, one of the best movies to come out of the 80s. One of the most beloved films of all time.

WHY RENT SOMETHING ELSE: Some may find this a little dated.

FAMILY VALUES:  There is some sensuality and mild violence.

TRIVIAL PURSUIT: Fox was still starring in Family Ties when he signed to do this film. Because of his television commitment, he filmed most of his scenes from 6pm until 3am, getting about five hours of sleep a night. Scenes set in daylight were filmed on weekends. He managed to film the entire movie without missing a single shot of his television show.

NOTABLE HOME VIDEO EXTRAS: There are outtakes and a Q&A session with film students at the University of Southern California and producer Bob Gale and director Robert Zemeckis. There’s also an extended conversation with Fox. The 2-Disc Collector’s Edition also includes a TV special, Back to the Future Night made to promote the sequel hosted by the late Leslie Nielsen, the footage from both the lobby and the ride of Back to the Future: The Ride which once was a big attraction at Universal Studios but no longer exists. There is also an independent retrospective, Looking Back to the Future which was originally feature-length and has been considerably cut here. The movie is available on Blu-Ray currently only as part of a boxed set including the entire trilogy which IMHO is worth owning as a complete set.

BOX OFFICE PERFORMANCE: $381.1M on a $19M production budget; this was one of the biggest blockbusters of the 80s.

COMPARISON SHOPPING: Blast From the Past

TOMORROW: In My Sleep