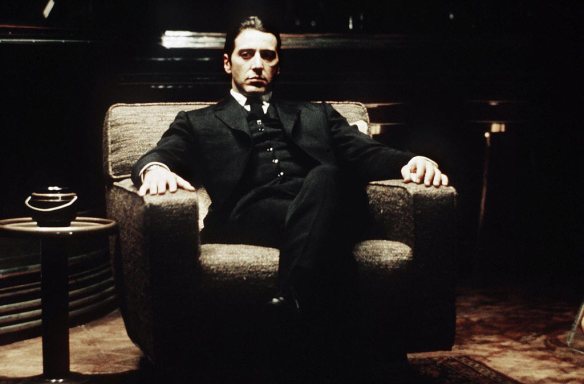 A picture of corruption.

It is rare enough that a movie with the quality and the impact of The Godfather gets made. It is rarer still that a movie that prestigious has a sequel made. And for that sequel to be as good if not better than the precursor, well that’s a very lonely group.

But that’s exactly what Francis Ford Coppola did when he made the second installment of what would turn out to be a trilogy. The story is told in two distinct segments that are alternated in the original cut of the film between young Vito Corleone fleeing from Sicily from a corrupt Mafia don who’d murdered his father over an imagined slight. Young Vito (De Niro) marries and tries a life of the straight and narrow but poverty and corruption conspire to draw him into a life of crime at which he excels. The other segment is that of Michael, now head of the family, brokering a deal with Jewish gangster Hymen Roth (Strasberg) in Cuba while dealing with betrayal from a source unexpectedly close to him.

Coppola deftly weaves the two stories together and although they are essentially unrelated, the flow of the movie is never interrupted. It’s a masterful job of directing and editing and a tribute that we as the audience are never disappointed when one segment ends and the next one begins. We are equally drawn to young Vito and the older Michael.

Pacino, reprising his role as Michael Corleone and without Marlon Brando to upstage him, turns in what is largely considered the defining performance of his career. The corruption of Michael is growing as his desire for power and to retain it at all costs slowly warps his soul. It’s absolutely masterful as we see Michael turn from soft-spoken war hero to cold, calculating monster in the course of two films.

There are some powerful scenes, such as one before a Senate subcommittee on organized crime in which one of Michael’s capos are due to testify against him. The mute confrontation between Frankie Pentangeli (Gazzo) and his brother is as powerful a moment as has ever been recorded in cinema.

The question of whether the sequel is better than the original is one that rages fairly passionately within the film buff community. There are plenty who argue that the first is the best; there are just as many who argue just as vehemently that the sequel outdoes the original. For my own part, I think that both movies are nearly equal in cinematic excellence. My own personal preference leans towards the first Godfather however – by just a hair.

So do you need both of these films? Absolutely. Separately they are both magnificent films that should be in every film lover’s collection. Together they constitute one of the most remarkable achievements in the history of the movies. They remain today as they were 40 years ago enormously influential not only on the gangster genre but on cinema in general. This, like the first film, is one you’ll want to see many, many times and will pick up something new that you didn’t notice before each time you see it.

WHY RENT THIS: Another must-see for everyone who loves movies. A rare sequel that is as good as the original.

WHY RENT SOMETHING ELSE: Some may find the violence off-putting.

FAMILY VALUES:  More than its share of violence (some of it bloody) and foul language. There is also some sensuality and brief nudity.

NOTABLE HOME VIDEO EXTRAS: Be warned that editions which contain the individual films tend to be fairly sparse with extras. If you’re looking for extras you’re better off picking up the trilogy boxed sets in either DVD or Blu-Ray which include some scintillating material as it relates to the trilogy plus it is a cost-effective way to get all three films in the saga. However if you want to skip the third film and are just interested in the movies themselves without the bells and whistles, buying them individually is the way to go.

NEXT: Out of the Furnace