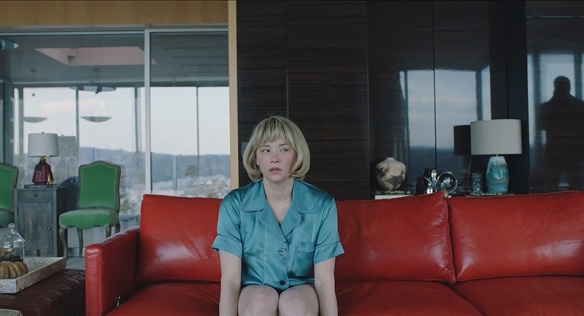 A great movie tells a great or compelling story. We are taken from point A to point B and all the way to the end, watching the story unfold. That isn’t always the case, however. Sometimes, what makes a movie great are the things that are left unsaid.

Hunter (Bennett) would seem on the surface to have it made. She is married to a wealthy husband (Stowell), a rising star in his father’s (Rasche) firm. She lives in a gorgeous house her in-laws bought for the couple. To top it all off, she is newly pregnant. What’s not to like?

Plenty, as it turns out. As the movie progresses, we see that the in-laws, supportive and caring on the surface, pay only lip service to that persona. What they really are is condescending and controlling, particularly her mother-in-law (Marvel). Hunter has come to realize that she’s in a prison cell. A comfortable, beautiful prison cell but a prison cell nonetheless.

Her means of regaining control is by ingesting objects that aren’t edible, starting with marbles and dirt, ramping up to more dangerous items like batteries, pushpins and thumbtacks. Is she trying to off herself and/or the baby? Or is there something deeper at play here?

This squirm-inducing psychological body horror film is based on a real condition called pica. Mirabella-Davis takes the tactic of not answering all the questions; we are never given a definitive answer as to why Hunter is subjecting herself to this dangerous habit. Is it a means of courting danger and getting an adrenaline rush? Is it compensation for her past which is revealed during a conversation with her therapist (Dias). That past is dealt with eventually in a coda in which she establishes that she has a voice and is no longer content to be the submissive, mousy little housewife. The tone of the denouement is at odds with the rest of the movie which renders it much more effective.

Bennett is a revelation, delivering a mind-blowing performance that is terrifically layered, showing a surface persona that hides deep-seated anxieties and resentment. Despite Hunter’s often maddening submissive behavior, Bennett makes the character someone we can root for particularly in the last third of the movie.

The production design is also quite amazing; despite the modern conveniences (Hunter constantly plays video games on her smartphone), there is very much a 50’s/early 60’s vibe here, from Hunter’s perky blonde bob, her A-line skirt wardrobe and the 64 World’s Fair furnishings. Cinematographer Katelin Arizmendi impresses with shots bathed in lush primary colors. It’s visually a very striking film.

This isn’t for everyone. The scenes of her ingesting some of the items are cringe-inducing to say the least and the scenes of her retrieving the bloody objects from the toilet may send some straight for the exit. Still, this is a mesmerizing film that cinema buffs are going to appreciate and horror fans might just find compelling.

REASONS TO SEE: Bennett gives a bravura performance. Disturbing on in a good way on so many levels.
REASONS TO AVOID: Sometimes gets caught up in its own bizarre tone.
FAMILY VALUES: There is some profanity, plenty of sexuality and some truly disturbing behavior.
TRIVIAL PURSUIT: This is Mirabella-Davis’ first solo feature film; the movie was inspired by his grandmother’s institutionalization and eventual lobotomizing. During the film’s Tribeca screening, an audience member actually fainted during the thumbtack ingestion scene.
CRITICAL MASS: As of 3/13/20: Rotten Tomatoes: 86% positive reviews: Metacritic: 67/100
COMPARISON SHOPPING: Teeth
FINAL RATING: 7.5/10
NEXT: Los Ultimos Frikis