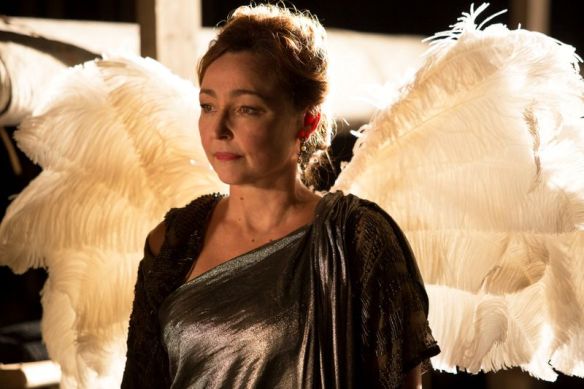 Not quite the voice of an angel.

Dreams are all well and good, but one must have the basic equipment to pursue them, else they become instruments of self-torture. That’s where delusion can be a blessing.

Marguerite Dumont (Frot) is a wealthy matron of the arts in Paris in the 1920s. Her husband Georges (Marcon) is a baron who depends on her wealth to keep his estates running. Marguerite is kind and sweet-natured and everyone loves her, particularly her chauffeur Madelbos (Mpunga), who also acts as her unofficial photographer.
Marguerite also loves to sing, opera in particular. She often holds recitals at her home for her circle of family and friends, or for the musical society she helped found. The problem is – she can’t sing a note. She has trouble holding the high notes and often sounds like a cat being smacked against a brick wall. It’s so unbelievably bad that when she practices, Madelbos often hands out earplugs to the servants around the estate.

Nobody is willing to break her heart by telling her since everyone adores her. At a private recital for war orphans, which she has been giving annually since the Great War ended, an opening act is invited – a beautiful soprano named Hazel (Théret) who is actually talented. Sneaking in are music critic Lucien Beaumont (Dieuaide) and anarchist and Dadaist Kyrill (Fenoy) to find out what goes on at these soirees for themselves.

When Marguerite, the main event comes on, the assemblage has to work hard to restrain their titters. Both Lucien and Kyrill have differing reactions; Lucien writes a review which is deliberately vague as to her talent; when Marguerite reads it, she interprets it as a vindication of her abilities and she determines to put on a public concert. Kyrill, on the other hand, sees Marguerite as a living refutation of art and offers to have her perform at Dadaist events, which she does – and it gets her thrown out of her own musical society.

She decides to enlist some help and Madelbos blackmails down-on-his-luck opera singer Atos Pezzini (Fau) to tutor her. He puts her into a rigorous training schedule, some of which is a little bit – unusual, to say the least. As the date approaches, Georges is encouraged to tell his wife the truth and spare her the humiliation, but can’t bring himself to do it. Nobody is willing or able to tell Marguerite with most of the people around her having an agenda of their own. What happens to a dream when you discover that you can never possibly achieve it?

Giannoli loosely based his latest work on the life of a real person, American diva Florence Foster Jenkins; you can hear her singing on her Wikipedia page and the Mozart aria “Der Hölle Rache” from The Magic Flute which is the first song Marguerite sings in the film. It is nearly a note-perfect rendition and has to be heard to be believed.

The production design is absolutely flawless, bringing back the Jazz Age in Paris to a T. We get the sense of wealth and luxury that is destined to come crashing down in just a few short years Still, it is an epoch regarded with some affection today and we are given a good taste of it thanks to the filmmakers’ eye for detail.

Frot is also amazing; she exudes charm and sweetness and never lets the ridiculousness of her character’s delusions devolve into ludicrousness. In fact, Marguerite is a sympathetic character but her delusions don’t make her ridiculous; rather they make her identifiable for most of us. I mean, I’d love to be a rock star but a portly balding 50 plus year old with a lousy voice isn’t exactly going to fill up concert halls. I still dream of rock stardom however, and watching Marguerite I find a certain wistfulness that makes my dreams seem less ridiculous by comparison.

The movie is a bit on the long side with a few unnecessary plotlines that could have easily have been eliminated for the sake of brevity. There’s also a drawing room stage-like quality that sometimes gets a little claustrophobic; Giannoli could have expanded his canvas a little bit and made the movie more palatable. Still, I liked the layers of the film; there’s a lot to think about here and a lot worth looking into.

Don’t be off put by the singing; it’s truly awful but it isn’t the focus here. What is that sometimes it’s better to tell a woman who asks you “Do I look fat in this dress” the truth; in the long run, it might be best for everyone concerned if those delusions get punctured as early as possible. However, this film has no delusions; this is a strong and worthwhile effort that any decent film buff will want to go see without delay.

REASONS TO GO: Frot gives a dynamic performance. Sumptuous production values.
REASONS TO STAY: A little bit on the stage-y side. A little too much going on.
FAMILY VALUES: There is some sexual content and a scene of brief graphic nudity, as well as a scene of brief drug use.
TRIVIAL PURSUIT: The lead character’s name is taken from the opera-singing foil for the Marx Brothers in their films.
CRITICAL MASS: As of 4/1/16: Rotten Tomatoes: 96% positive reviews. Metacritic: 76/100.
COMPARISON SHOPPING: Harvey
FINAL RATING: 8/10
NEXT: Batman v. Superman: Dawn of Justice