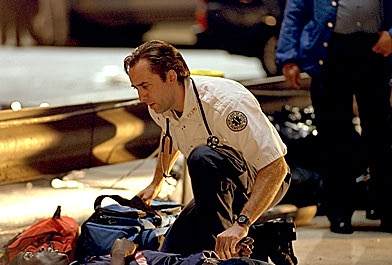 Martin Scorsese is one of my favorite directors. OK, that’s true for a lot of people – Scorsese is quite frankly one of the most accomplished directors ever. He knows the streets of New York City like nobody else. Whereas Woody Allen is uptown Manhattan, Scorsese is the lower Bronx. He can take murderers and junkies and make them compelling.

Bringing Out the Dead is about a burned-out New York EMS technician named Frank (Cage), who during the course of a hot, humid weekend, hopes to save a life and somehow find redemption from the ghosts that haunt him, particularly one named Rose, a street urchin who died while under his care.

During the first night, he and his larger-than-life partner (Goodman) haul in a coronary patient barely clinging to life. Frank finds himself drawn to the estranged daughter (Arquette) of the dying man, an oddly vulnerable woman with many complex layers. As the weekend progresses, Frank encounters junkies, drunks, gang bangers, victims, drug dealers, predators and criminals of all sorts.

Frank longs to be put out of his misery and tries his very best to get fired, turning to alcohol as the only way to ease his pain. Over the course of the weekend, he rides with a variety of partners, including the Bible-thumping lady-killer Marcus (Rhames) and on the final night, his psychotic ex-partner (Sizemore). He drifts through the flotsam and jetsam of humanity, struggling to avoid drowning himself.

Scorsese’s visual style carries the movie, using light and shadow to delineate Frank’s fall from grace and his attempt to rise above. Nobody uses motion and color like Scorsese, and he uses it well here.

Unfortunately, Paul Schrader’s script (Schrader and Scorsese previously collaborated on Taxi Driver) is scattershot, ill-plotted and occasionally pointless. I suppose the story is meant to reflect the pointlessness of life in the underbelly of a city where death and despair are constant companions. However, exorcising our demons is not just a matter of forgiveness; it requires faith and good timing too. When Frank encounters Rose for the last time, I found myself screaming at the screen “I get it, I get it already!!!!!!”

Cage was at a point in his career when he made this where he was still respected as an actor although he seems to be the butt of many late night talk show host jokes these days. His eyes here are sad, world-weary and expressive; it wasn’t his best performance ever but it might well make his all-time top ten. He gets to work off of a variety of foils for whom Sizemore and Goodman seem to be the most memorable. Arquette is luminous as Cage’s love interest.

Frank looks at the world through desperate eyes, seeking some kind of miracle in the muck. That he finds saintliness amid the squalor is a testament to his faith. That I watched the movie to its conclusion is a testament of my faith in Scorsese. Sadly, my faith was unrewarded, and I have to tell you that if you need a fix of Scorsese, go rent Casino, Goodfellas or The Departed instead.

WHY RENT THIS: Hey, it’s Martin Scorsese – that should be enough. One of Cage’s best all-time performances.

WHY RENT SOMETHING ELSE: An unsatisfying and often meandering plot line serves to emphasize the story’s points a little too much.

FAMILY MATTERS: There’s a good deal of violence, enough bad language to make anybody blush and a goodly amout of drug use.

TRIVIAL PURSUITS: There are two dispatchers heard in the movie, one male and one female. The male dispatcher’s voice is Scorsese; the female’s is rapper Queen Latifah, who would later go on to fame as an actress in her own right. This is also the last movie to be released on laserdisc.

BOX OFFICE PERFORMANCE: $16.8M on a $55M production budget; the movie was a commercial flop.