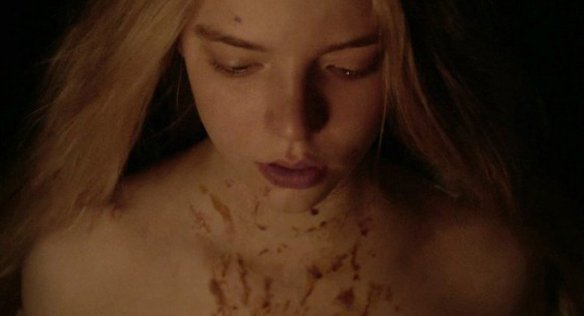 Anya Taylor-Joy contemplates a role that might just kickstart her career.

I don’t normally do this, but I’m going to make an exception; if you haven’t seen The Witch and are wondering if you should, the answer is yes you should. Don’t read another word – just go and see the movie and come back here and read this when you do. The less you know about what’s going to happen to you, the better.

There; I’m assuming most of you reading from here on out have already seen it, have no desire to see it or are choosing to ignore my warning. That’s on you then. The Witch is set on a farm on the edge of a dark sinister wood in New England in the year of our lord 1630 – and I’m not kidding when I say the year of our lord. For farmer William (Ineson) and his pious wife Katherine (Dickie), the Lord is ever present and watching over their every move, their every thought. Banished from the settlement because of some unspecified disagreement in terms of religious dogma – I got the sense that William and his family thought the Puritans were far too loose and relaxed about the worship of God and baby Jesus – they are forced to try and make it on their own with a few goats including an ornery ebony-hued one they call Black Philip – and crops of corn and whatever else they can grow.

But the crops are failing. The goat’s milk has turned to blood and worse yet the baby has disappeared literally right from under the nose of teen and eldest child Thomasin (Taylor-Joy).  Katherine is inconsolable and William stoically makes the best of things, taking son Caleb (Scrimshaw) hunting in the woods, or ordering the twins Mercy (Grainger) and Jonas (Dawson) about. The twins speak to each other in a secret language only they understand and constantly annoy Thomasin, whom they won’t listen to. But then something else happens in the woods, something dark and sinister and the family begins to turn on itself, their faith tested to the breaking point. Here, on the edge of darkness, they will look into the abyss with trepidation.

I won’t say the horror film has been undergoing a renaissance in the last few years because clearly the overall quality of horror movies tends to be been there-done that to a large extreme, but there have been several movies that have come out that have really invigorated the genre. This is the latest, having won raves at last year’s Sundance Film Festival and only now getting released. It’s very much worth the wait, folks.

First-time feature director Eggers makes some impressive accomplishments, conjuring forth the world of the early colonial days and 17th century New England, from the English speech patterns down to the rude farming implements, the primitive living conditions and the homespun costumes. More importantly, he builds a creepy atmosphere that begins with unsettling events and moves into things far more sinister. The family dynamic changes as we watch with suspicion being dropped from one family member to another as accusations of witchcraft and deals with the devil begin to fly.

The cinematography by Jarin Blaschke is top-notch. In fact, this may very well be the most beautifully shot horror film in history, which is saying a lot. The unsettling musical score by Mark Korven further enhances the mood particularly as the movie spirals deeper into its story. He utilizes a lot of unusual instrumentation, from Eastern European folk instruments to the hurdy-gurdy.

The actors are largely unknown, but there are some solid performances here. Anya Taylor-Joy is remarkable here, with an innocence about her that cracks from time to time; her expression in the very final scene simply takes the movie up another notch. Ineson is gruff and gritty as a farmer who knows he is incompetent at just about everything but chopping wood and his family is suffering from his inability. Dickie has the shrill look of a religious fanatic, neck veins bulging and eyes bugging out. She looks like someone who is wound far too tight and Katherine is definitely that. Finally, young Harvey Scrimshaw shows some incredible depth as young Caleb; hopefully he’ll appear in some big budget event films because he so has game for that kind of thing.

This is the first movie of the year that I think has a good chance to end up on my end of the year top ten list. It’s scary as all get out and has subtexts of religious intolerance, suspicion and family ties strained by adversity. It’s smart, well thought out and doesn’t waste an instant of it’s 90 minute running time. So yes, go out and see it if you already haven’t. Every horror film fan should be flocking to this one for sure.

REASONS TO GO: Wonderfully atmospheric. Really captures the feel of the era. A beautifully layered script. Some lovely cinematography.
REASONS TO STAY: Takes awhile to build which may frustrate the impatient sorts.
FAMILY VALUES: Creepy atmosphere, some graphic nudity and violence as well as some disturbing images.
TRIVIAL PURSUIT: There were plans to use more of Black Philip (the goat) but because the animal proved to be not as well-trained as the filmmakers would have liked, those plans had to be scrapped.
CRITICAL MASS: As of 2/24/16: Rotten Tomatoes: 82% positive reviews. Metacritic: 65/100.
COMPARISON SHOPPING: Blood on Satan’s Claw
FINAL RATING: 9.5/10
NEXT: The Last Rites of Joe May